All Las Vegas victims named as search for motive continues

Stephen Paddock would wake up screaming during the night, girlfriend tells FBI 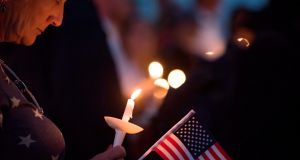 Police in Las Vegas continued to search for a possible motive for last Sunday’s deadly gun attack which left 59 people dead and several hundred wounded, as all those killed in the atrocity were named by police.

The FBI, which has assigned 100 agents to the case, searched bank statements and electronic devices belonging to gunman Stephen Paddock in a bid to find out why he launched the deadliest gun attack in US history. But there was little to suggest a motive for the attack.

Police confirmed that a note written by the gunman had been found at the scene which contained numbers. Police said it was not a suicide note. They also declined to confirm whether the note represented some form of communication.

There were unconfirmed reports that Paddock’s car, which was parked at the Mandalay Bay hotel and contained explosives, was rigged to explode if fired upon.

Further insight into Paddock’s mindset emerged as his hairdresser described her most recent meeting with the gunman in an interview with CNN. She described how Paddock had visited the salon two months ago with his girlfriend Marilou Danley, and told her that Ms Danley would be travelling to the Philippines.

It is not clear if Ms Danley heard the alleged conversation. In a statement issued through her lawyer after FBI questioning on Wednesday the 62-year-old Australian citizen, who was born in the Philippines, suggested she only heard about the trip a few weeks before she left.

It was also reported that Ms Danley told investigators that Paddock would wake up in the middle of the night screaming and moaning “Oh my God”, and had displayed mental health symptoms.

Thirty-six women and 22 men, ranging in age from 20 to 67, were fatally shot at the Route 91 country music festival on Sunday when Paddock opened fire from a hotel suite on the 32nd floor of the Mandalay Bay hotel. The victims came from across the United States.

Hundreds of people took part in a candlelight memorial on Thursday night for Charleston Hartfield, the Las Vegas police officer who was killed in the attack. The 34-year-old father of two was off duty at the time and was attending the concert with his wife.

Paddock was found dead in his hotel suite with 23 weapons, 12 of which had been enhanced with “bump stocks” – devices that are fitted to semi-automatic weapons to simulate the capacity of automatic weapons.

The National Rifle Association, which had been silent since Sunday’s attack, said it supported possible new rules on the devices.

“The NRA believes that devices intended to allow semi-automatic rifles to function like fully automatic rifles should be subject to additional regulations,” Wayne LaPierre and Chris Cox, the group’s top two leaders, said in a statement.

“In an increasingly dangerous world, the NRA remains focused on our mission: strengthening Americans’ Second Amendment freedom to defend themselves, their families and their communities.”

Senior Republicans, including House Speaker Paul Ryan, have said they would also support such a move.