Gorsuch vows to stand up to Donald Trump if necessary

Supreme Court nominee grilled by senators about views on abortion, guns and torture 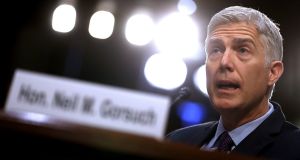 Neil Gorsuch testifies during the second day of his Senate hearing. The judge’s nomination to the Supreme Court is expected to be confirmed. Photograph: Justin Sullivan/Getty

Donald Trump’s Supreme Court nominee Neil Gorsuch said “no man is above the law” as he vowed to stand up, if necessary, to the man who nominated him to the United States’ highest court.

In the second day of his confirmation hearing at the US senate Mr Gorsuch batted questions from Republican and Democratic lawmakers on his independence and suitability for the post, with the 49-year-old judge facing tough questions from Democrats about his views on abortion, gun control and the use of torture.

Asked by Republican Lindsey Graham what he would have done if Mr Trump had asked him to overturn Roe v Wade, the 1973 judgment that established the right to abortion, he replied: “Senator, I would have walked out the door. That’s not what judges do”, adding that he leaves his “personal views” at home.

Similarly he defended his independence when questioned by Democratic senator Dianne Feinstein about the Supreme Court’s 2008 ruling in District of Columbia V Heller case, affirming the right of people to keep guns in their homes for self-defence. “Whatever is in Heller is the law and I follow the law. It’s not a matter of agreeing or disagreeing,” he said.

Still, Mr Gorsuch successfully managed to sidestep questions about how he would rule on certain cases, despite Democrats raising previous cases and instances from his past, including a complaint brought by two former students about alleged comments he made that women needed to inform their employers about their pregnancy intentions.

While Mr Gorsuch is expected to be confirmed, eight democrats are needed to support his nomination. If a 60-40 majority is not secured, Senate majority leader Mitch McConnell has indicated he is prepared to use the “nuclear option” and override the rule that demands a 60-40 majority to confirm a Supreme Court nominee.

Democrats are still smarting over Republicans’ refusal to consider president Barack Obama’s nominee Merrick Garland to fill the seat left on the court by the death of Antonin Scalia. Senator Pat Leahy said he was not prepared to “rubber-stamp a nominee”, while minority Senate leader Chuck Schumer said: “Republicans held this Supreme Court seat open for nearly a calendar year while President Obama was in office but are now rushing to fill the seat for a president whose campaign is under investigation by the FBI.”

With Mr Gorsuch’s Senate hearing scheduled to continue throughout the week, on the other side of the US Capitol, the House of Representatives was racing to secure enough votes to support the Republican proposal to repeal and replace Obamacare ahead of an expected vote later this week.

Mr Trump met privately with House Republicans on Tuesday in order to drum up support for the Bill, which has been championed by House speaker Paul Ryan. Speaking after the closed-door meeting, the president told reporters: “We had a great meeting, terrific meeting . . . I think we’ll get the vote.”

Mr Trump also urged the crowd at his “Make America Great Again” rally in Kentucky on Monday to support the new plan. “We want a very big tax cut, but cannot do that until we keep our promise to repeal and replace the disaster known as Obamacare,” he told the crowd of thousands. “This is our long-awaited chance to finally get rid of Obamacare.”

Even if it passes the House, the replacement proposal, known as the American Health Care Act, is likely to face opposition from some conservative Republicans in the Senate, who oppose elements of the bill, and are demanding changes.