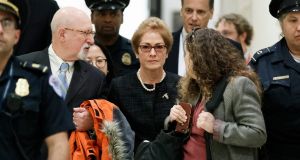 Former US ambassador to Ukraine Marie Yovanovitch suggested Rudy Giuliani had a role in her removal. Photograph: EPA/Shawn Thew

The former US ambassador to Ukraine who was recalled from her post early by the state department delivered a damning account of her experience with the Trump administration on Friday.

Marie Yovanovitch, a career diplomat who was ambassador to Ukraine until May this year, told politicians her removal was based on “unfounded and false claims by people with clearly questionable motives”.

Ms Yovanovitch was questioned by politicians in a closed-door session on Friday, defying an instruction by the state department that its employees would not be co-operating with the impeachment inquiry launched by Democrats last month.

According to her opening statement, which was obtained by US media outlets before her appearance, she said she was informed by John Sullivan, the deputy secretary of state, that the president had lost confidence in her, and that there was a concerted campaign against her. While she was testifying, the White House announced that Mr Sullivan would be the next ambassador to Russia.

Ms Yovanovitch said she had met Rudy Giuliani, the president’s personal lawyer, only a handful of times, but suggested that he had a role in her removal. Stating that she did not know his “motives” for attacking her, she said: “Individuals who have been named in the press as contacts of Mr Giuliani may well have believed that their personal financial ambitions were stymied by our anti-corruption policy in Ukraine.”

Her testimony puts further pressure on the US president Donald Trump as he faces an impeachment inquiry in Congress.

Democrats are questioning Mr Trump’s links with Ukraine, in particular his move to request the Ukrainian government to investigate former vice-president Joe Biden, a political rival. The former ambassador’s appearance took place a day after two associates of Mr Giuliani, who were involved with his efforts to find incriminating information about Mr Biden in Ukraine, were charged with campaign finance violations.

In a further development, Gordon Sondland, the US’s ambassador to the European Union who was barred from testifying to House committees earlier this week by the White House, said he will testify next week.

“Ambassador Sondland has at all times acted with integrity and in the interests of the United States, ” his lawyers said in a statement on Friday. “He has no agenda apart from answering the committees’ questions fully and truthfully.” However, his lawyers also said that Mr Sondland would not be providing documents deemed to be relevant to the inquiry as requested by the committees as that would be in violation of law.

Fiona Hill, a former Trump adviser on Russia who left the administration this summer, is due to appear before the three relevant congressional committees on Monday.

Ms Yovanovitch’s testimony on Capitol Hill unfolded as a court struck down an appeal by Mr Trump to stop a House subpoena of records from his accountants, Mazars. The US Court of Appeals for the District of Columbia Circuit upheld a lower court ruling saying the firm must turn over eight years of accounting records.

Mr Trump, who was due to travel to Louisiana later on Friday for a campaign event, raised the issue of impeachment during a rally in Minneapolis on Thursday evening.

“The Democrats’ brazen attempt to overthrow our government will produce a backlash at the ballot box, the likes of which they have never ever seen before in the history of this country,” he said, to cheers.

Also on Friday, the US announced the deployment of additional American military forces to Saudi Arabia to bolster the kingdom’s defences after the September 14th attack on its oil facilities, which Washington and Riyadh have blamed on Iran. Additional reporting: Reuters