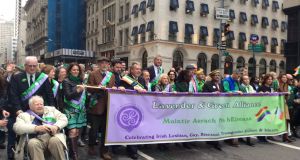 “This is unbelievable,” said an emotional Brendan Fay, the co-founder of the group, the Lavender & Green Alliance (marching above), who fought for 25 years for the parade to be opened up to gay groups. Photograph: Simon Carswell/The Irish Times 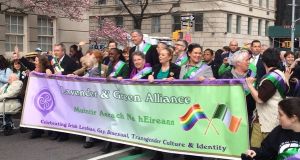 “This is unbelievable,” said an emotional Brendan Fay, the co-founder of the group, the Lavender & Green Alliance, who fought for 25 years for the parade to be opened up to gay groups.

“After all these years, this is all we ever wanted, was to be among our community, celebrating our heritage and culture, being gay and being Irish. Today that moment has arrived,” he said, walking a few feet from Mr De Blasio and his wife, Charlene McCray.

Dr John Lahey, the chairman of the parade committee who pushed the organisation to change its ways, marched with the group for a large section of the parade, the oldest and biggest in the US.

“This is a historic moment,” he told The Irish Times as he walked. “It is the most inclusive parade in our 255-year history. In many ways, as you can tell, it is the most unifying parade we have had in 25 years.”

In his first year as mayor, Mr De Blasio boycotted the famous parade that draws hundreds of thousands of spectators every year and skipped it last year after the parade only admitted one LGBT group. He changed his mind when the Irish group was permitted to march.

“It is not in our nature to be divided,” he said at his Gracie Mansion residence at a St Patrick’s Day breakfast for the Irish. “Ultimately, New Yorkers are a compassionate and tolerant people, and it is in our nature to find a way forward, and that is what happened this year.”

Minister for Foreign Affairs Charlie Flanagan, speaking at the breakfast, called the parade as the “biggest and best in the world”. This year he was “very proud to add that it is also the most inclusive,” said Mr Flanagan, who helped kick-start the negotiations to open the parade up.

“It has been a long time coming and it is so brilliant that the banner is carried in the year of the commemoration of the Rising because this is what it is about - it is about inclusivity,” she said.

Marching too was Irish author Colum McCann. It was the first time he had even been to the parade during his 25 years living in the city - he had never wanted to come before: “I just thought it was so neanderthal.”

He was reminded of the words of Russian poet Anna Akhmatova as he walked: “You’re many years late/How happy I am to see you.

“It’s just so late and it’s shameful that it is so late - but it’s here and things have changed,” he said.

“This is a significant moment. I think it is kind of wonderful.”

Another New York politician to march behind the banner was Christine Quinn, who was the first openly gay Speaker of New York City Council, the third most powerful public representative in the city.

“It’s like a miracle. My father walked part of the way. We just sent him home. He’s 89. He will be 90 in August,” said Ms Quinn, standing next to Mr De Blasio, her one-time rival who beat her in the 2013 mayoral race.

“I didn’t really think that it would come to pass. He had been sick last year and I didn’t think he would make it.

“Really anything is possible.”