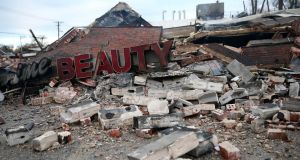 A building damaged during a demonstration in Missouri. Photograph: Justin Sullivan/Getty Images

The violent reaction to the decision of a grand jury of randomly picked citizens not to indict white police officer Darren Wilson (28) over the August 9th killing of unarmed black teenager Michael Brown (18) brought long-simmering tensions to an ugly boil again.

Protesters in cities across the US took to the streets in their thousands to rail against what they see as an example of racial bias where mostly white police target black men disproportionately.

“Hands up, don’t shoot,” chanted the demonstrators in a gesture of solidarity with the surrendering gesture that some eyewitnesses to Brown’s killing said they saw that day in August.

But even that was questioned during an “exhaustive” review of evidence by nine white and three black jurors who heard 70 hours of testimony from 60 witnesses over 25 days.

The jury listened to “absolutely everything” that could be considered in the case, he said. At least nine votes were required for an indictment.

McCulloch even released four hours of Wilson’s testimony along with photographs showing swelling and redness on his face. This purported to show the impact of the two blows landed by Brown that led the officer to shoot him 12 times in two bursts of gunfire.

Wilson told jurors that Brown leaned into his car and tried to grab his gun. Brown was raging; his face looked “like a demon,” and in the scuffle, he “felt like a five-year-old holding on to Hulk Hogan,” he said in his testimony, the first account from his perspective.

Wilson told ABC’s George Stephanopoulos, who beat other news anchors for the first interview with the officer, that faced with the same situation he would do nothing differently and that he was doing his job.

The Brown family criticised the decision of prosecutors to defer a decision on whether to bring charges to a grand jury, while questions were raised about why the jury’s decision was made so late in the evening, increasing the potential for violent protest.

President Barack Obama’s televised remarks after the grand jury decision on Monday night were also badly timed. While calling for calm, he touched on the reasons why “in too many parts of this country, a deep distrust exists between law enforcement and communities of colour”.

Wilson could still face civil rights charges from the US department of justice – attorney general Eric Holder said its investigation “remains ongoing” – or a wrongful death suit filed by the Brown family. The Ferguson cauldron of racial tension will continue to bubble.