It is possible a ‘wider group of individuals’ were responsible for Manchester explosion, says Theresa May

Twenty-two people have been killed and more than 50 have been injured in a terror attack at Manchester Arena. The explosions happened at 10.30pm on Monday night, after a concert by the US singer Ariana Grande. Video: Reuters 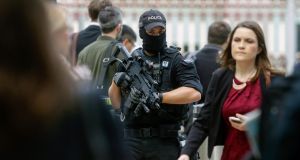 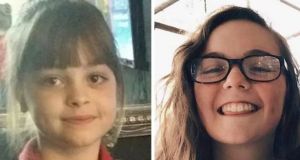 Eight-year-old Saffie Rose Roussos and 18-year-old Georgina Callander who perished in the terror attack at the Manchester Arena.

As investigations into the Manchester terrorist attack in which a male suicide bomber killed 22 people continues the terror threat level in Britain is being increased from severe to critical, indicating that a further attack is imminent, Prime Minister Theresa May said.

The Manchester bomber was named as 22-year-old Salman Abedi by Greater Manchester chief constable Ian Hopkins. US officials who have been in contact with British authorities said the suspect was believed to have travelled to Manchester from London by train.

Ms May said Tuesday night it is possible that there is a “wider group of individuals” responsible for the Manchester explosion.

Military personnel could be deployed to support armed police officers, she added.

Manchester chief constable Ian Hopkins said earlier that a team of specially-trained Family Liaison Officers are supporting families affected by the blast at the Manchester Arena on Monday night which killed 22 people.

“There has been much speculation and names of those who may have been killed in the media and social media. We accept that this is inevitable however we ask that people allow the police and coroner to release the names once the families are ready and appropriately supported,” said Mr Hopkins.

“As you would expect the police response to this across Greater Manchester has been significant as we support people to go about their daily business.

“Part of this response has seen us arrest a 23-year-old man in connection with the attack and we have also carried out two warrants, one in Whalley Range and one in Fallowfield that included a controlled explosion to enable safe entry.

“We understand that feelings are very raw right now . . . I can confirm that the man suspected of carrying out last night’s atrocity has been named as 22-year-old Salman Abedi. However, he has not yet been formally identified and I wouldn’t wish, therefore, to comment further.

“The priority remains to establish whether he was acting alone or as part of a network.”

The so-called Islamic State claimed responsibility for Monday night’s suicide bombing at an Ariana Grande concert, which killed 22 people and injured 59 more. The attack was carried out with explosives planted at Manchester Arena, according to a statement reported by Reuters.

What we know so far

– At least 22 people, some of them children, killed in the bombing

– No reports of Irish among dead or injured

– Worst terrorist attack in the UK since 2005 London bombings

The attacker is understood to be either British or from Britain, according to the BBC, although this has not been confirmed by official sources.

His home-made bomb, which witnesses said was packed with nuts and bolts, exploded in the foyer of Manchester Arena shortly after 10.30pm on Monday, as 21,000 fans were leaving the venue.

Meanwhile, a second bomb victim has been named as eight-year-old Saffie Rose Roussos. She was at the concert with her mother, Lisa Roussos, and sister Ashlee Bromwich. It is understood they are being treated in hospital.

The first victim to be named in the aftermath of the attack was 18-year-old Georgina Callander.

Ms Callander was a student in the second year of a health and social-care course at Runshaw College, in Lancashire. “Our deepest sympathies, thoughts and prayers go out to all of Georgina’s family, friends, and all of those affected by this loss”, the college said.

Chris Upton, headteacher of Tarleton Community Primary School, in Preston, where Saffie was a pupil, said: “She was simply a beautiful little girl in every aspect of the word. She was loved by everyone, and her warmth and kindness will be remembered fondly.”

The news of her death had come as a tremendous shock, he added. “The thought that anyone could go out to a concert and not come home is heartbreaking.”

Tributes have also been paid to 26-year-old John Atkinson from Bury, who was named by friends on Facebook as an apparent victim. Donations to support the families of those injured and killed have poured in following the atrocity.

Twelve seriously injured children under the age of 16 were among the 59 casualties taken to hospital after the attack, according to North West Ambulance Service.

Witnesses said that Monday night’s blast prompted a stampede as the concert ended at Europe’s largest indoor arena. “We ran, and people were screaming around us and pushing on the stairs to go outside, and people were falling down, girls were crying, and we saw these women being treated by paramedics having open wounds on their legs . . . It was just chaos,” said Sebastian Diaz, a 19-year-old fan. “It was literally just a minute after it ended. The lights came on, and the bomb went off.”

Searching for loved ones

Hundreds of parents, relatives and friends are searching for loved ones. Anyone in Ireland with concerns for family and friends can contact the consular division of the Department of Foreign Affairs in Dublin on 01-4082000. In the UK an emergency helpline, 00-44-161-8569400, has been set up.

Facebook has activated its safety-check feature, so people can let loved ones know they are safe. The #MissingInManchester hashtag is being used on Twitter. Families and friends are asking people to retweet and share photographs, in the hope of finding people who are still missing.

Ms May earlier called a meeting of the government’s emergency committee, Cobra.

Speaking outside 10 Downing Street after the meeting, before travelling to Manchester, she said: “All acts of terrorism are cowardly . . . but this attack stands out for its appalling, sickening cowardice, deliberately targeting innocent, defenceless children and young people who should have been enjoying one of the most memorable nights of their lives.”

It was the worst terrorist incident in Britain since the 2005 London suicide bombings, in which 52 people died.

Taoiseach Enda Kenny said: “The city of Manchester has exceptionally close ties with our country, and I extend the solidarity of the Irish Government and all our people to those affected across the UK.”

A vigil will be held at 6pm on Tuesday in Albert Square, Manchester.