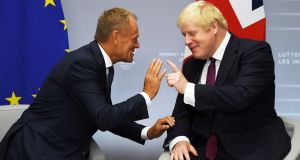 French efforts to save the 2015 nuclear deal with Iran, known as the JCPOA, dominated the G7 summit in Biarritz on Saturday and Sunday, with the surprise arrival of the Iranian foreign minister, Mohammad Javad Zarif, for talks with his French counterpart, Jean-Yves Le Drian.

Zarif met with President Emmanuel Macron at the Élysée on Friday.

Macron discussed Iran over a two-hour lunch with President Donald Trump on Saturday. Trump withdrew from the agreement in May 2018, and threatens to punish European countries that trade with Iran.

A discussion by the leaders of Canada, France, Germany, Italy, Japan, the UK and US on Saturday night resulted in “two strong lines”, Macron said on Sunday. “No member of the G7 wants Iran to obtain nuclear weapons, ever, and all G7 members are deeply attached to the peace and stability of the region.”

An adviser said Macron was trying to “create the conditions of de-escalation” and achieve a “pause”.

Trump has resisted what he sees as Macron’s attempts to mediate in the crisis. “I know Emmanuel means well,” Trump tweeted on August 8th. “But nobody speaks for the United States. No one is authorised in any way, shape, or form to represent us!”

An aide said Macron “obtained a mandate to discuss and address a message to the Iranian authorities” during Saturday night’s exchanges.

Trump said he had not been party to any such discussion. Asked about Zarif’s presence, Trump said “no comment”.

Macron smoothed over the misunderstanding, saying, “The G7 is an informal club. There is no formal mandate given within the framework of the G7 . . . There are initiatives that will continue to be taken.”

Trump wanted the summit to discuss what he regards as unfair Chinese trade practices, not climate change and inequality, themes emphasised by Macron. The New York Times quoted Trump’s advisers saying Macron focused too much on “politically correct bromides” and “niche issues”.

Trump created something of a sensation by appearing to say he regretted escalating tariffs and threats against China last week. White House press secretary Stephanie Grisham then said the US leader had been “misinterpreted”.

In a televised address to the French people at the start of the summit, Macron said he would ask the summit to reduce the speed of merchant vessels at sea, and work with the textile industry to reduce pollution. He said textiles accounted for 30 per cent of waste in the oceans, and as much carbon dioxide as all international flights and maritime transport combined.

The fires in the Amazon rain forest were also discussed by G7 leaders. Before the summit started, Macron accused Brazilian president Jair Bolsonaro of lying, and said he would withdraw support for the EU’s trade agreement with the South American trade bloc Mercosur. Taoiseach Leo Varadkar also questioned the agreement, which is opposed by farmers and ecologists.

Macron said G7 leaders were “working on a international mechanism to help” countries affected by the Amazon fires. He called France “an Amazonian power” because French Guyana shares a 730km border with Brazil.

Trump and British prime minister Boris Johnson created news on the sidelines of the summit. When they breakfasted together on Sunday, their first meeting since Johnson became prime minister, Trump said Johnson was “the right man” to deliver Brexit and promised a deal that would compensate the UK’s lost trade with the EU would quickly follow.

“We’re going to do a very big trade deal, bigger than we’ve ever had with the UK,” Trump said, calling UK membership in the EU “the obstacle . . . the anchor around their ankle”.

Johnson sounded slightly more hopeful about a negotiated departure from the EU in an interview with the BBC on the sidelines of the summit. The odds of striking a deal were “touch and go”, Johnson said. He earlier estimated odds at “a million to one”.

There was a “lively discussion” over the readmission of Russia, which would reconstitute the group as the G8. Russia was expelled after it invaded and annexed the Crimean peninsula of Ukraine in 2014. Macron says Russia cannot return to the G8 until it ends its intervention in eastern Ukraine. Trump said he may invite Russia to participate in next year’s G7 summit in the US.