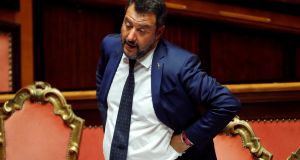 The far-right League leader announced his intention to break up the fractious coalition with the Five Star Movement after weeks of heightened tensions, which culminated on Wednesday with a split vote over a planned high-speed rail link to France.

While the project has already been approved, Mr Salvini said the division laid bare the “insults” of recent days and it was “pointless” for the government to continue.

Mr Salvini said a vote in parliament should acknowledge that the government headed by prime minister Giuseppe Conte no longer had enough votes to survive. The ball would then be with President Giuseppe Mattarella, who has the power to dissolve parliament and call new elections.

The Five Star Movement’s deputy prime minister, Luigi Di Maio, said he was ready to go to elections but urged deputies to first give final approval to a law that would drastically reduce the numbers of seats in parliament. Luigi Zingaretti, leader of the opposition Democratic Party, said he was “ready” for a new vote.

While tension between the League and Five Star has been a constant since the start of the coalition more than a year ago, the temperature has been rising in recent days as Mr Salvini’s advisers have pushed for an early election. The anti-immigrant firebrand is far ahead in the polls and has been weighing whether to ditch Five Star, repeatedly accusing his partners of blocking his campaign promises.

“It’s pointless to go ahead with ‘no’s and quarrels like in the past few weeks, Italians need certainties and a government capable of acting,” Mr Salvini said in a statement on Thursday night. “We don’t want more cabinet seats or ministries, we don’t want a reshuffle or a technocratic government.”

Italy’s parliament is currently in recess and it’s not clear when a vote can be held, with Italian media floating August 20th as a possible date for the confidence vote. Highlighting the complexity of the situation, on Monday Italy’s senate renewed its confidence in Mr Conte’s government when it passed a security law handing Mr Salvini more powers to curb immigration.

The euro slipped in the wake of Mr Salvini’s comments and touched an intraday low against the Swiss franc.

“I think Italy will schedule new elections between next October 15th and October 30th and that’s good because it will remove all the uncertainty and the tensions of the last months,” Francesco Giavazzi, a professor of economics at Milan’s Bocconi University, said in a phone interview. The outcome would be pretty clear, he added, as according to all polls “Salvini’s League will get about 40 per cent”. – Bloomberg