Buddhist enclave in India welcomes freedom from Jammu and Kashmir 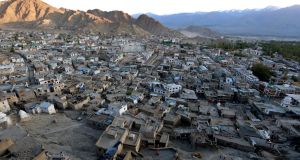 Leh, the capital of Ladakh: locals expect their new status will help them emerge from the “dominating shadow” of Kashmir. Photograph: Cathal McNaughton

India’s predominantly Buddhist enclave of Ladakh has welcomed the federal government’s decision to separate it from the disputed and insurgency-ridden northern Jammu and Kashmir state, saying it will boost economic development.

The decision to separate Ladakh from the rest of Jammu and Kashmir was part of the wider policy shift announced on Monday removing Indian Kashmir’s autonomy.

The enclave’s sole MP, Jamyang Tsering Namgyal, told parliament that making Ladakh a part of Jammu and Kashmir in the late 1940s had resulted in it being deprived of all developmental initiatives for decades.

“The mistakes of the past have now been rectified,” he said after Indian home minister Amit Shah announced the withdrawal of the special powers bestowed on Jammu and Kashmir state some seven decades ago to make its own laws.

“We are very happy that we are separated from Kashmir, as now we can be the owners of our own destiny,” said Tsering Samphel, a member of the opposition Congress Party, whose leader Jawaharlal Nehru had made Ladakh a part of Kashmir in the late 1940s, despite opposition to the move by local leaders.

Ladakh, Mr Samphel said, was dwarfed by the Muslim-majority Kashmir region, with which it had little in common culturally. As a result it had been unable to get its share of economic development.

Under the new arrangement, Ladakh’s population of 274,000, spread over an area of 59,146sq km, much of it uninhabitable but encircled with breathtaking Himalayan ranges, monasteries and massive lakes, will now be federally administered.

It will not have a legislature, but will be administered by a lieutenant governor appointed by New Delhi, in a move expected to generate developmental funds that were “sidetracked” by Kashmiri officials, according to supporters of the move .

According to news reports from Leh, locals expect their region’s new status will help it emerge from the “dominating shadow” of Kashmir.

Mountain tribes constitute about 90 per cent of Ladakh’s population, all of whom have limited means of livelihood. Employment opportunities are scarce and they have to negotiate poor or non-existent roads, and bad telecommunication and internet connectivity.

Power supply is infrequent and pollution caused by diesel- and paraffin-fuelled generators, operated by scores of hotels, damages the environment during the summer tourist season.

The entire region is cut off from the rest of India during winter for almost six months due to snow; agriculture is difficult to pursue and rainfall is infrequent.

Water too is scarce, even though several rivers, including the Indus, run through its steep mountains, whose precipitous passes connect Ladakh to central Asia, Tibet and China

“Hopefully by making Ladakh a federally administered territory, a continuing historic wrong will now be corrected,” said Raghav Chandra, a former retired civil servant in Delhi. Varied “humane” laws applicable to the rest of the country could now be enforced in Ladakh, he added.

China, which lays claim to territory in the Ladakh region as part of an unresolved territory dispute dating back several decades, has criticised Delhi’s decision to place it under federal rule.

India’s foreign ministry spokesman responded that the decision on Ladakh was an “internal matter”. “India does not comment on the internal affairs of other countries, and similarly expects other countries to do likewise,” said Raveesh Kumar, without directly referring to China.