‘Dreamers’ programme for young immigrants must reopen, US judge rules 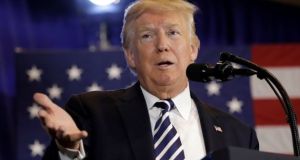 The Trump administration must accept new applications for the Deferred Action for Childhood Arrivals programme, also known as Daca, which protects some young immigrants from deportation, a federal judge ruled on Friday.

The ruling by Judge Nicholas Garaufis means that the administration must reopen the program to first-time applicants and return the period of protections to two years.

In July, the acting secretary of the Department of Homeland Security, Chad Wolf, issued a memo that suspended Daca for new applications and reduced how long renewals were valid from for - from two years to one year.

Friday’s ruling follows one from November, in which Judge Garaufis said Mr Wolf had assumed his position unlawfully, and his suspension of the Daca program was therefore invalid.

The Daca programme was created in 2012 under Barack Obama and allows people brought to the US unlawfully as children the temporary right to legally live, study and work in America, rather than living in fear of deportation. The program allowed young immigrants to do basic things like get driver’s licenses, apply for colleges or get work permits.

Those protected under Daca are known as “Dreamers”. About 650,000 people are currently enrolled in the proMr gram.

Daca became a major flashpoint under the Trump administration. During the 2016 election, Mr Trump promised to rip up Daca immediately, triggering a legal battle that continued throughout his presidency, winding up in the supreme court this year.

The supreme court in June blocked Mr Trump’s bid to end Daca, calling it “arbitrary and capricious” and saying that it violated federal law. His administration, however, continued its policy of not accepting new applications for the program.

Joe Biden has pledged to make Daca permanent via legislation when he takes office. –Guardian