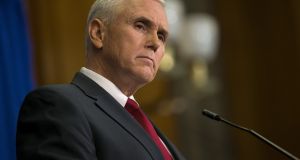 Indiana governor Mike Pence has been selected by Donald Trump to be his running mate. Mr Pence hails from an Irish Catholic family with grandparents from Sligo and Clare. Photograph: Aaron P Bernstein/Getty Images

The New York businessman announced his choice on his Twitter account after postponing a scheduled event in Manhattan to unveil Mr Pence in the wake of the terror attack in Nice, France.

“I am pleased to announce that I have chosen Governor Mike Pence as my vice presidential running mate,” Mr Trump said in a tweet.

The announcement comes a day after news leaked out that the governor was the businessman’s choice of running mate.

The billionaire property developer plans to hold a news conference on Saturday concerning the appointment.

Mr Pence (57), a staunch social conservative and devout Christian, served in the US House of Representatives from 2001 to 2013 where he rose through the Republican ranks to become the party’s third-ranking member in the lower chamber of congress.

He is popular with both establishment Republicans and tea party conservatives on the hard-right of the party.

Hailing from an Irish Catholic family with grandparents from Sligo and Clare, Mr Pence was elected governor of Indiana in 2013 and was due to submit his papers to seek re-election as governor ahead of a deadline on Friday before Mr Trump’s announcement.

He was reportedly on a final shortlist with two other candidates: New Jersey governor Chris Christie and former House speaker Newt Gingrich.

The announcement comes ahead of the Republican national convention in Cleveland, Ohio, which starts on Monday, where Mr Trump is expected to be formally confirmed as the party’s standard-bearer in the November 8th presidential election.

The billionaire (70) teased supporters at a rally in an Indianapolis suburb on Tuesday night where he appeared next to Mr Pence at a campaign event that was seen as an audition for his eventual running mate.

“You’ll be calling up Mike Pence – I don’t know whether he is going to be your governor or your vice president – who the hell knows,” he told supporters.

The Indiana governor, described by one Republican insider as “a safe bet” for Mr Trump, may help the thrice-married former Democrat among social conservatives and evangelical Christians concerned about his positions on issues such as abortion and same-sex marriage.

The rust-belt governor on the “Trump-Pence 2016” ticket could push the reality-TV star’s candidacy among blue-collar workers across the industrial midwest where places such as Ohio, Michigan and parts of western Pennsylvania could play a critical role in winning electoral college votes in the November election fight against Democrat Hillary Clinton.

He is regarded as being more moderate on immigration reform and was among a minority of Republicans who appeared willing to agree a deal on overhauling immigration laws in 2009.

Asked why he was supportive of change on immigration, Mr Pence told the New York Times that it was because of “April 11th, 1923”– the date his Irish grandfather emigrated to the US passing through Ellis Island in New York, the entry point for millions of immigrants.

The midwestern politician has spoken of his close bond with his grandfather Richard Michael Cawley, who emigrated from Tubbercurry, Co Sligo, and became a bus driver in Chicago.