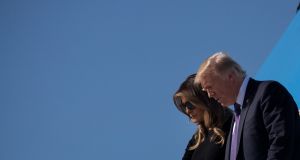 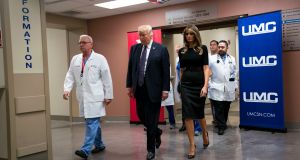 President Donald Trump arrived in Las Vegas on Wednesday to visit a city shaken by the deadliest shooting spree in modern US history.

The president and first lady Melania Trump visited Clark County sheriff Joseph Lombardo after landing, then departed for a Las Vegas hospital, where they met victims of the attack.

Stephen Paddock, a 64-year-old retiree with no criminal record, was identified as the gunman in Sunday night’s attack, spraying bullets at an open-air concert from the window of his suite at the Mandalay Bay hotel and killing 58 people. He killed himself in the hotel room as police closed in.

Mr Trump’s trip is the first time he has had to deal directly with the aftermath of a major mass shooting of the type that has killed hundreds of people in recent years in the US.

“We’ll, it’s a very sad thing. We’re going to pay our respects and to see the police who have done really a fantastic job in a very short time,” Mr Trump told reporters at the White House earlier on Wednesday. “It’s a very, very sad day for me, personally.”

Mr Trump held a moment of silence on the White House South Lawn after the Las Vegas attack and ordered flags lowered to half-mast. He has called the massacre “an act of pure evil”.

Paddock’s partner is being quizzed by police as they attempt to establish his motive for the mass shooting.

Marilou Danley (62), who was in the Philippines at the time of the shooting which injured 530 concertgoers, was met by FBI agents on Tuesday night after she landed in Los Angeles on a flight from the Philippines.

I will be landing in Las Vegas shortly to pay my respects with @FLOTUS Melania. Everyone remains in our thoughts and prayers.

Investigators still have not found a motive for the massacre, an FBI official said Wednesday, but they hope that Ms Danley can provide some insight into what prompted a man with no evident criminal history to become a mass murderer.

The bureau is trying to reconstruct the actions of the gunman, including finding and interviewing “everyone and anyone who crossed his path in recent weeks”, Andrew G McCabe, the deputy director of the FBI, said at a cybersecurity conference in Boston.

Interviewed outside the conference by CNBC, Mr McCabe said: “We don’t have any immediately accessible thumbprints that would indicate the shooter’s ideology or motivation or, really, what compelled him to get there.”

Stephen Paddock “is an individual who was not on our radar or anyone’s radar prior to the event”, he said. “So we really have a challenging bit of detective work to do here, to kind of put the pieces back together after the fact.”

Paddock, a high-stakes gambler, wired thousands of dollars to the Philippines just days before the shooting, a federal official said. Authorities would not confirm to whom the transactions were intended.

Police on Tuesday revised the number of victims killed on Sunday to 58. All but three of the people have been identified.

Mr Trump said “a lot more” was being learned about Paddock. “That’ll be announced at the appropriate time,” he said.

On Tuesday, he called Paddock sick and demented.

Mr Trump has had mixed success in the “consoler-in-chief” role that is periodically expected of US presidents. He inflamed racial tensions after a white-supremacist rally in Charlottesville, Virginia, and he has struggled to strike the right tone in response to hurricane devastation in Puerto Rico.

Visiting Puerto Rico on Tuesday, Mr Trump said jokingly that the recovery from Hurricane Maria on the island was blowing the US budget “a little out of whack”.

During his time in the US territory, he met more people charged with responding to the crisis than people affected by it.

The Las Vegas shooting has reignited a debate in the US about whether more gun control legislation might have prevented what happened. Republicans who control the US Congress have shown little inclination to respond to Democratic calls for gun measures.

Mr Trump, a Republican who firmly aligned himself with gun rights advocates during last year’s presidential campaign, was asked on Tuesday whether it was time to debate gun control measures. “Perhaps that will come. But that’s not for now,” he replied.