Theresa May tells Tories to shape up and put Britain first 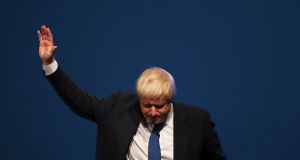 Britain’s foreign secretary Boris Johnson: received the most enthusiastic reception of the conference when he spoke on Tuesday. Photograph: Hannah McKay/Reuters

Prime minister Theresa May will on Wednesday tell her government to shape up and focus on solving Britain’s problems rather than on their own political ambitions. And she will signal her determination to stay on as prime minister, despite criticism of her leadership within the party and Boris Johnson’s open challenge to her authority.

In her closing speech to the Conservative Party conference in Manchester, Ms May will say that she and her party have always been guided by a sense of duty.

“So let us do our duty by Britain. Let us shape up and give the country the government it needs. For beyond this hall, beyond the gossip pages of the newspapers, and beyond the streets, corridors and meeting rooms of Westminster, life continues – the daily lives of ordinary working people go on. And they must be our focus today. Not worrying about our job security, but theirs. Not addressing our concerns, but the issues, the problems, the challenges, that concern them,” she is expected to say.

Throughout the conference, the prime minister has faced questions about her future after Mr Johnson appeared to question her strategy on Brexit twice in two weeks. In her speech on Wednesday, however, Ms May will say that she entered politics to make a difference and to change things for the better.

“None of this will be easy. There will be obstacles and barriers along the way. But it has never been my style to hide from a challenge, to shrink from a task, to retreat in the face of difficulty, to give up and turn away. And it is when tested the most that we reach deep within ourselves and find that our capacity to rise to the challenge before us may well be limitless,” she is expected to say.

Mr Johnson received the most enthusiastic reception of the conference when he spoke on Tuesday, defending the government’s record, attacking Jeremy Corbyn and telling party activists that the Conservatives can still win the future. He praised Ms May’s leadership and said he stood fully behind her speech in Florence, when she proposed a status quo transition period of about two years after Britain leaves the EU in 2019.

“She won more votes than any party leader and took this party to its highest share of the vote in any election in the last 25 years and the whole country owes her a debt for her steadfastness in taking Britain forward as she will to a great Brexit deal. Based on that Florence speech on whose every syllable, I can tell you the whole cabinet is united,” he said.

Earlier, Brexit secretary David Davis told the conference that Britain and the EU were close to a deal on the rights of citizens and had made progress on issues concerning Ireland. He said his government was aiming for a good deal and expected to achieve it but was also making contingency plans in case Britain had to leave without a deal.

“That is what a responsible government does. Anything else would be a dereliction of duty. So there is a determined exercise under way in Whitehall devoted to contingency arrangements so that we are ready for any outcome. Not because it is what we seek, but because it needs to be done,” he said.

Labour’s shadow Brexit secretary Keir Starmer urged the prime minister to face down the hard Brexiteers in her party, adding that Conservative infighting was harming the negotiations.

“David Davis’s damp squib of a speech has offered nothing new on how the Government intends to break the impasse in Brexit negotiations and deliver a new progressive partnership with the EU. On the day the European Parliament voted to delay future trade talks with Britain, it is now clear that Tory infighting is harming the Brexit process. Paralysis in the negotiations risks havoc for the British economy and uncertainty for EU and UK citizens,” he said.