US protests have complicated Joe Biden’s path to the presidency 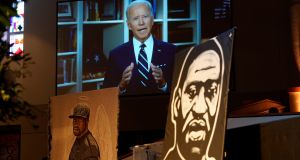 Until now, Joe Biden has made a dry and quiet case for his election as US president. He may not have pledged a “return to normalcy” (a tainted phrase with shades of Warren Harding’s interwar isolationism) but that was the nub of it.

Voters who loathed Donald Trump but did not want equal and opposite upheaval could count on the former vice-president for a quiet life. Incremental reform, yes. More cordial relations with America’s familiar allies, unquestionably. But a progressive revolution could wait, at least until the country took a four or eight-year breather.

Among the legacies of recent weeks is that this spare, workmanlike campaign seems less and less tenable. The killing of George Floyd by a Minneapolis police officer is leading, via street protests, to clamour for more thoroughgoing change. An election that was going to pit a high-drama incumbent against an innocuous restorationist may come to look more like a face-off of radicalisms. Americans would confront an even clearer choice than seemed probable just a month ago.

Police reform is Biden’s first test. In the main, it is municipalities that decide these things, but the federal government serves more than a guiding role. He says he will not “defund the police” (a slogan that seems to have protean meaning anyway) though he will trammel them.

To judge by a bill drafted by Democrats this week, this implies, among other things, a ban on some aggressive tactics and an easier means of prosecuting officers. It is unclear if this will be enough to cool the anger of the moment.

But even if it is, the protests already range beyond policing to housing, employment, health outcomes and other areas of racial disparity. The corollary of “defund the police” is often “fund other services”. Having seen off senators Bernie Sanders and Elizabeth Warren, both challengers to his left, Biden may yet have to emulate their ambitions for a more redistributive state.

He can resist the pressure for change, of course, but at some risk of a schism within the Democratic coalition. On the other hand, if Biden changes radically, Trump stands by with accusations of leftwing sellout.

Early efforts to that end have not worked. The self-described “law and order” president trails in the opinion polls, sometimes by double digits. But then Biden has not defined his policies all that much. For months, he has prospered through lockdown-enforced circumspection. The more specific he becomes, the more material the Republicans will have to interrogate.

Because of the polls, it is natural to see the protests as a problem for the president alone. But they also upend, or at least complicate, the platform on which Biden was expecting to stand. A safety-first campaign always fit this establishment stalwart like a dream. Whether it fits the mood of the day is less obvious.

The trouble with “normalcy” is that it is now sullied in many minds with racial and economic problems that were glossed over. Do the thought experiment: had the protests occurred three months earlier, would he have won the Democratic nomination? Or would his authorship of tough criminal laws in the 1990s have told against him?

Nothing crystallises the dilemmas that face Biden like his choice of running mate. Before the protests, he might have underlined his own moderation by recruiting from the centre-left. He could then run a version of the Democrats’ 2018 midterm campaign, with its tight focus on healthcare (even more salient since Covid-19) and its subdued rhetoric. To that end, Minnesota senator Amy Klobuchar was said to be in the vetting process.

It is now unthinkable that a politician from the state where Floyd died will get the nod. Kamala Harris, the African-American senator from California, is likelier, though her own prosecutorial past is awkward at a time when black incarceration rates are such a vexed question.

In a country where racial history varies so much from place to place, a local or state-level politician might fit. Two Georgians, Stacey Abrams and Keisha Bottoms – the first a former state legislator and the second the Atlanta mayor – are both talked up. But at 77, Biden might need to present voters with an understudy seasoned enough in Washington to take over.

Whoever he runs with, the man who confronts Trump in the autumn will not be the one who clinched the nomination in the spring. Too much has changed for a quiet life to be on the ballot. Classically, a Democrat wins their party’s nomination on a leftish platform and then swerves the other way as November nears. Events are obliging Biden to perform the reverse trick. – Copyright The Financial Times Limited 2020