‘Don’t be such a chicken squat. Get out there and get your shot,’ says singer (75)

Dolly Parton has been inoculated by the Covid-19 vaccine she helped to fund. The country music star even broke into song while getting the jab. 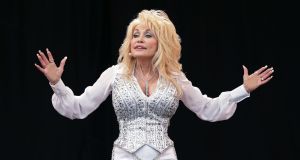 Dolly Parton broke into song while getting the jab and adapted one of her best-known ballads. Photograph: Yui Mok/PA Wire

Dolly Parton has been inoculated by the Covid-19 vaccine she helped to fund.

The country music star (75) broke into song while getting the jab and adapted one of her best-known ballads.

“I’m trying to be funny now, but I’m dead serious about the vaccine. I think we all want to get back to normal, whatever that is. And that would be a great shot in the arm, wouldn’t it, if we could get back to that?

“But anyhow, I just wanted to encourage everybody because the sooner we get to feeling better, the sooner we are going to get back to being normal.

Parton added: “I just want to say to all of you cowards out there — don’t be such a chicken squat. Get out there and get your shot.”

Parton masked up before inviting a doctor into the room. The medic, an old friend of Parton, praised her for urging others to get the vaccine.

After he knocked an item off the table while preparing the jab, a giggling Parton quipped: “I didn’t know you was going to be so clumsy, I hope you’re going to do better with my shot!”

After getting her first jab, Parton said: “That didn’t hurt.”

Parton is the latest celebrity to publicly confirm they have had the vaccine.