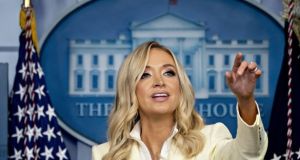 Responding to the news, one anonymous Fox News staffer quoted by the Daily Beast called McEnany “a mini-Goebbels” who “helped incite an insurrection on our democracy”.

The Fox News host Harris Faulkner made the announcement around an interview with the former Trump aide, saying it was her “distinct pleasure today to welcome Kayleigh McEnany to the Fox family. We will be seeing much more of her in the future.

“Coming up just a bit later this hour, more from Kayleigh including meeting the challenges of being a new mom while serving in the White House.”

A Fox News spokesperson confirmed that McEnany had joined the network as an “on-air commentator”, a role she previously filled at CNN.

McEnany was Donald Trump’s fourth press secretary, after Sean Spicer, Sarah Sanders and Stephanie Grisham. She famously promised she would “never” lie to reporters, a promise she struggled to fulfil while representing a president who by one count made 30,573 false or misleading claims in office.

McEnany’s post-White House plans first came into focus in January, when a government watchdog, Citizens for Responsibility and Ethics in Washington, published a “termination financial disclosure report” which said she had reached an agreement with Rupert Murdoch’s news network.

“During her stint in the Trump administration,” Crew said, “McEnany regularly appeared on [Fox News], including more than 20 times after Trump lost the 2020 election.”

Fox News said then McEnany had not joined. It did announce a Fox Business show for Larry Kudlow, formerly Trump’s chief economic adviser.

Among McEnany’s White House predecessors, Sanders recently relinquished a Fox News deal in order to run for governor in Arkansas while Spicer has joined Newsmax, an increasingly fierce rightwing and pro-Trump competitor.

As press secretary, McEnany advanced Trump’s lie that the presidential election was stolen by Joe Biden, by means of massive electoral fraud. In service of that lie, on 6 January, Trump incited supporters to attack the US Capitol.

Before the Senate judiciary committee on Tuesday, Christopher Wray, the FBI director, said the riot was an instance of “domestic terrorism”.

Though Trump was reportedly pleased by events at the Capitol, McEnany told Faulkner on Fox News, the mood that day was one of “disbelief, shock, sombere, sad, horrified by the violence, and it was a very hard, difficult day in the White House, there is no doubt”.

Later on Tuesday the Daily Beast quoted an anonymous “Fox News insider” referring to both the Capitol riot and the firing of staffers who called the election for Biden, saying: “It’s truly disgusting they fired hard-working journalists who did care about facts and news reporting only to turn around and hire a mini-Goebbels whose incessant lies from the White House helped incite an insurrection on our democracy that got five people killed, including a police officer.

“Post-Trump Fox is quickly becoming a very scary place and quite dangerous for our democracy. It’s not even conservative news any more. They’ve plunged into an alternate reality where extremist propaganda is the only course on the menu.”

Another anonymous Fox News source told the Beast the hiring made sense, as “Sarah Sanders just left to run for governor of Arkansas and our audience loves Kayleigh”.

The CNN host Brian Stelter, author of Hoax: Donald Trump, Fox News and the Dangerous Distortion of Truth, tweeted: “One way to think about Fox News in 2021 is as the Trump White House in exile.” –Guardian