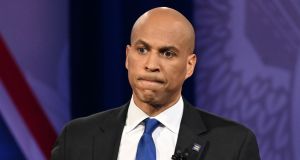 Cory Booker: Had been talked about as potential presidential material for two decades. Photograph: Robyn Beck/AFP via Getty Images

US senator Cory Booker, an African-American candidate who had bemoaned the increasing lack of diversity in the Democratic presidential field, ended his White House campaign on Monday, saying he lacked the money to extend his bid.

A gifted orator who earned plaudits for his debate performances and his speeches on the campaign trail, the New Jersey Democrat had immediately been seen as a top contender when he launched his campaign in February 2019.

But the high-spirited Mr Booker never found traction with voters. As the criteria for qualifying for debates became more restrictive, he was left off the stage in December and January – further complicating his long-shot candidacy.

His departure from the race came one day before the latest Democratic presidential debate in Iowa, where six candidates, all white, have qualified for the stage. Only one black candidate, former Massachusetts governor Deval Patrick, remains in what had once been the most diverse field of presidential contenders in history.

Mr Booker (50) had centred his campaign on calling for love, unity and common purpose to combat Donald Trump’s divisive rhetoric, a message that occasionally seemed at odds with a Democratic base deeply angered by the president’s behavior.

In an email to supporters, Mr Booker said the campaign did not have the money to continue competing, especially given that he would miss Tuesday’s debate and will likely be forced off the campaign trail to serve as a juror in Mr Trump’s upcoming impeachment trial in the Senate.

“I’m proud of the ideas we brought to this Democratic primary and, more importantly, the values we championed throughout – that the only way we make progress is by bringing people together – even when we were told that our approach couldn’t win,” Mr Booker said.

Mr Booker had been talked about as potential presidential material for two decades, ever since his underdog campaign for the mayor’s office in Newark, New Jersey, was chronicled in an Academy Award-nominated documentary.

At times, his plea to supporters in the 2020 campaign seemed tinged with desperation. In September, he warned that unless he raised $1.7 million in 10 days, he would have to drop out of the race.

Mr Booker had hoped to gain a boost from the large black population in South Carolina, which votes fourth among the early states in the Democratic nomination race. But polls have shown him trailing far behind former vice-president Joe Biden there, and Mr Booker’s chances of success appeared to rest on a strong showing in first-in-the-nation Iowa caucuses on February 3rd.

Party insiders in Iowa and New Hampshire, the second state to vote, often expressed bewilderment at Mr Booker’s lack of strength in polling. In interviews, voters in Iowa frequently named Mr Booker as among their favourite candidates but rarely put him at the top of the list.

Like many other candidates, Mr Booker struggled to garner attention in what was the largest field of presidential candidates in modern history, with rivals like Mr Biden and fellow US senator Elizabeth Warren monopolising much of the media’s focus. – Reuters