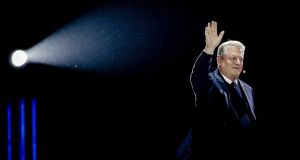 Former US vice president and environmental activist Al Gore: the memory of his narrow defeat in 2000 and the effect of third-party candidates will be the message that Democrats will most want to drive home to voters. Photograph: Robin Van Lonkhuijsen/EPA

This week’s leak that former US vice-president Al Gore would shortly be hitting the presidential campaign trail for Hillary Clinton was spun as an attempt by the Democrats to appeal to young people concerned about climate change.

The appearance of environmental activist Gore next to Clinton will appeal to voters concerned about the warming of the planet. But it will be the memory of his narrow defeat in 2000 and the effect of third-party candidates in that race that will be the message that Democrats will most want to drive home to voters.

Some of those terrified by the prospect of a President Donald Trump will not be old enough to remember the hanging chads of Florida. Older Democrats like to blame Ralph Nader’s Green candidacy for Gore’s half-point loss to George W Bush in that race 16 years ago rather than the shortcomings in the Democrat himself or his campaign.

Nader’s 97,488 votes in Florida could have avoided that state’s cliffhanger and his 22,198 votes in little New Hampshire would have put Gore in the Oval Office.

Eight years of Bush meant Democrats learned the hard way and the image of Gore out there stumping for Clinton this time around will serve as a potent reminder of the danger of third-party candidates in a close race.

Clinton (68) has plenty to worry about on that front. She has a problem with millennials who are even more turned off by Trump (70). Her Democratic primary challenger Bernie Sanders (75) trounced her among the under-30s in the party’s qualifying rounds and she is struggling to win them over in the general election.

A CBS News poll on Monday gave Clinton an overall lead of 45 per cent to 41 per cent over Trump, with Libertarian nominee Gary Johnson at 8 per cent and the Green Party’s Jill Stein at 5 per cent.

Among the under-30s, Clinton’s lead fell to 40 per cent and Trump to 30 per cent, while Johnson rose to 21 per cent and Stein was at 5 per cent. In other words, one in every four young Americans will be voting for a candidate other than Clinton or Trump, based on this poll.

Barack Obama won 66 per cent of voters aged between 18 and 29 in 2008 and 60 per cent four years later, so the Clinton camp will be hoping that Gore can boost this key part of the winning Obama coalition.

Polls suggest that the Democratic nominee is hurt by both Johnson and Stein. The effect of the Green Party candidate is not unusual, given that most Stein voters lean to the left. The surprise is that Johnson (63) – a former governor of New Mexico and adventurist who has climbed the Seven Summits, the world’s highest peaks, including Everest – is hurting Clinton.

Libertarian voters, with their “Maximum Freedom, Minimum Government” mantra, tend to eat into Republican support because they are mostly male and white. In this election, with two deeply unpopular major-party nominees, support for Clinton falls further than for Trump when the third-party nominees are added, pointing to a protest vote of sorts against the two main candidates. It is a protest that is damaging Clinton more.

“What may be happening is that some anti-Trump Republicans or independents may opt for Clinton in the head-to-head poll question but go with Johnson when he’s included,” said Geoffrey Skelley of online election forecaster Sabato’s Crystal Ball, at the University of Virginia.

Johnson has done himself no favours with his recent “What is Aleppo?” howler in a live televised interview and his inability to name one foreign leader he admires (even days later). This week he was criticised for comparing the Syrian government’s targeting of civilians in that country’s conflict with the accidental bombing of civilians by US-based forces.

Still, the former medical-marijuana company boss is down with the young people and, in the independently minded battleground states of Colorado and New Hampshire, where he is polling at 9 per cent and 11 per cent respectively, far higher than Nader fared in both in 2000.

Expect these states to feature on Gore’s Clinton campaign itinerary.