Clinton and Trump out in front with Arizona victories

Three months of protracted competition ahead of presidential candiates 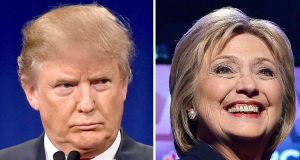 Republican Donald Trump and Democrat Hilary Clinton are frontrunners to secure their parties’ nominations for the presidential election. Photograph: AFP

Donald Trump and Hillary Clinton both won convincing victories in the Arizona presidential primaries on Tuesday, cementing their status as the frontrunners in Republican and Democratic races that are a long way from being settled.

In a sign both contests are shaping up to be long and drawn-out bids for delegates, Ted Cruz and Bernie Sanders, the main Republican and Democratic challengers, also notched significant victories in western states.

Mr Cruz swept to victory in Utah, and at 1am local time he appeared to potentially be on course to win more than 50 per cent of the votes. The threshold is pivotal under Utah’s Republican caucus rules, as it ensured the Texas senator would secure all of the state’s 40 delegates.

Mr Sanders also registered a resounding victory in Utah and added a second triumph in Idaho, a state only Democrats were holding a contest in on Tuesday.

However, Arizona was the largest delegate prize on Tuesday and was also the most fiercely contested, with Mr Trump, Mr Cruz, Mr Clinton and Mr Sanders all criss-crossing the state in recent days in a last-ditch effort to shore up support.

The strength of the victories by the Republican and Democratic frontrunners in the large, diverse state will add to the growing sense they are nominees-in-waiting, even if they have months of protracted contests ahead of them.

The Grand Canyon State is the largest purely winner-takes-all state left in the Republican calendar, and Trump’s victory ensured he won all 58 delegates. At 11pm local time, with close to half of Arizona votes counted, Trump was on 47 per cent, compared to Mr Cruz’s 23 per cent. Ohio Governor John Kasich was third, with around 10 per cent.

On the Democratic side, Ms Clinton had a similarly large margin of victory, with 60 per cent to Sanders’ 38 per cent.

At her victory speech at a rally in Seattle the former secretary of state immediately positioned herself as the Democratic presidential candidate in waiting, dwelling only briefly on the election results in order to focus instead on a critique of how her Republican rivals responded to the terrorist attacks in Brussels earlier in the day.

Ms Clinton contrasted what she claimed would be her “strong, smart and above all steady” leadership in the White House with the reaction of Republicans to the tragedy in Europe.

Mr Trump, who recently said the US should reconsider its involvement in the Nato defense alliance, a cornerstone of Washington’s foreign policy, responded to the terrorist atrocity by repeating his call to waterboard terror suspects. Mr Cruz, meanwhile, was widely criticised for reacting to the attacks with a call for law enforcement patrols of Muslim neighborhoods.

Appearing at a rally in San Diego before the Utah and Idaho results were in, Mr Sanders did not mention his loss in Arizona, instead focusing on his expected wins. “We have now won 10 primaries and caucuses,” a hoarse-sounding Mr Sanders told supporters. “And unless I’m mistaken, we’re going to win a couple more tonight.”

His forecast was correct, and the strength of Sanders’ victories in Utah and Idaho, where early voting returns indicated he could win as much as 70 per cent of the votes, will likely energize his supporters.