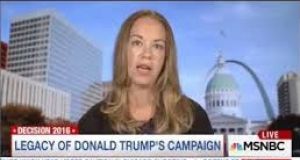 Sarah Kendzior has become a must-follow journalist, as her deeply unsettling predictions about how things will unfold as Trump mimics other authoritarian leaders continue to come to pass.

There was a time during Donald Trump’s election campaign and in the immediate aftermath of his win when the tweets of certain journalists sounded like they were being broadcast over CB radios. “Is there anybody out there? If you’re listening, you need to act quickly, we are in immediate danger.” These were journalists, authors, and commentators who feared the worst, who knew on November 9th that the jig was up and that there were just a couple of months before the inauguration to stop what would be a disaster for the American republic.

In the shock that followed Trump’s election, a chunk of the mainstream media effectively froze, fragmented between normalising the extraordinary, hoping for the best, and tangled in the impossible task of having to present what Trump was saying and doing as if it was all business as usual. As Fintan O’Toole wrote this week, “One of the oddities of current political discourse in the US is that there is still an Establishment illusion that Trump might settle down and become a normal president.” Since then, some media has lurched from attempting to keep sounding an alarm when the sirens are now wallpaper, to seeking to praise Trump for acting “presidential” when he drops bombs or doesn’t initiate another national crisis on a given afternoon.

Trump’s leaky White House has resulted in extraordinary journalism, with jaw-dropping detail in reporting, typified by Maggie Haberman of the New York Times’ endlessly Crichton-esque reports. Journalists within the press corp detail the ridiculousness of the whole new game, with the pecking order of the press room upended, outlets excluded, and a pinnacle reached this week when only a photographer from Russia’s TASS was given access to a meeting between Trump and Russia’s minister of foreign affairs Sergey Lavrov.

Right-wing conspiracy-obsessed media, such as Breitbart, InfoWars, One America News Network, LifeZette, the Daily Caller, Townhall and Gateway Pundit have come in from the fringes and been allowed access and influence in TrumpLand. A couple of years ago, even though the fake news trailblazer Fox News exists, it would have been unthinkable in “real” journalism that such outlets would be front and centre.

But there is another phenomenon in previously fringe-ish journalism too. While some new “journalists” the traditional journalists scoffed at until they were getting called on for questions ahead of them in the press room are gaining traction, so too is another cohort of journalism that the mainstream is just as quick to scoff at. Left-wing journalists who were previously seen to be alarmist in their reaction to and coverage of Trump and co are also coming in from the cold.

This is not to equate the two. There is obviously a massive difference between journalists reporting the truth and investigating real stories and yielding real facts, and the baying conspiracy propaganda of Breitbart & Sons. But it is interesting that the poles of journalism have been brought to the centre in terms of influence, even if those clearly opposed to Trump and questioning his corruption and ties to Russia and so forth aren’t sitting in the White House press room. Their press room is Twitter, and their influence is growing.

The reason it’s growing is the same reason people started to pay attention to Michael Moore again when Trump won. In July 2016, Moore ignored the prevailing winds of mainstream media and outlined the five reasons Trump would win; the “Midwest math” of winning Michigan, Wisconsin, Ohio and Pennsylvania, the last stand of the angry white man, Hillary Clinton’s unpopularity, the depressed Sanders vote, and the capacity for an electorate to vote mischievously. Like Moore, many commentators are making predictions that are playing out with eery accuracy.

As media continues to fragment, as mainstream media continues to lose trust and respect, as so many faults in coverage become more obvious in hindsight (“but her emails!”), the outsiders are gaining the inside track. It helps that some of these journalists have a level of insight or expertise when it comes to authoritarian regimes. Sarah Kendzior has become a must-follow journalist, as her deeply unsettling predictions about how things will unfold as Trump mimics other authoritarian leaders continue to come to pass. Andrea Chalupa who has written about Ukraine for Time and Forbes predicted that Comey would be fired. In the Guardian, Carole Cadwalladr is doing brilliant work on the connections between Brexit, Trump’s campaign, big data, Robert Mercer, Cambridge Analytica and everything in between.

Despite many journalists seeing themselves as right-on folk, there is a tendency to scoff or disregard left-leaning journalists whose shouts of warning sound a bit too loud for comfort. But as the right-wing conspiracy media makes a mockery of facts and truth, perhaps journalism could do with a few more people calling out the normalisation and “business-as-usual” approach that denies the extraordinary situation America is in.