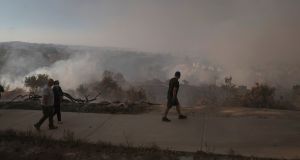 As two wildfires raged across southern California on Tuesday, nearly doubling in size overnight and forcing thousands more people to flee their homes, the state’s utility companies are again coming under scrutiny for their potential role in sparking new blazes.

Southern California Edison said its equipment may have played a role in starting one of the fires, the Silverado Fire, which had churned through more than 4,452 ha (11,000 acres) in Orange County. The fire raised more concerns about whether utilities have substantially improved their safety efforts, and whether the company should have more broadly shut off power in Southern California this week. Edison’s posture stood in contrast to Pacific Gas & Electric, which turned off power to a broad swath of northern California beginning Sunday over fears of dangerous wildfire conditions.

Fueled by strong Santa Ana winds, the fires in Orange County have put more than 90,000 people under emergency evacuation orders, many of them in Irvine. Their homes are being threatened by both the Silverado Fire and the Blue Ridge Fire, which has a footprint of about 6,070 ha (15,000 acres).

Investigators have not determined what ignited the fires, but on Monday, Southern California Edison filed its second wildfire incident report this year, saying that a telecommunications line might have struck its equipment and might have caused the Silverado Fire. Last month, the utility filed a report that said its equipment was part of an investigation into the cause of the Bobcat Fire, which burned about 46,943 ha (116,000 acres) near Pasadena.

But even critics of the utilities cautioned against drawing conclusions about the incident reports. Telecommunications companies hang their wires on utility poles and are responsible for their own equipment. “We don’t want to make any wide-eyed accusations without having the evidence,” said Mark Toney, executive director of the Utility Reform Network, which represents consumers before the utility commission. The record-breaking 2020 fire season has seen enormous wildfires tear across California and other states in the west. Experts have linked the worsening fire season to climate change, as emissions of carbon dioxide and other heat-trapping gases from the burning of fossil fuels have led to warmer and drier conditions.