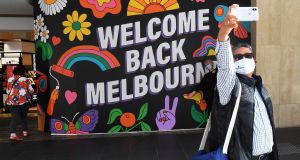 A man takes a picture in front of a sign after measures to curb the spread of the Covid-19 coronavirus were eased allowing limited numbers of people back into shops, bars, cafes and restaurants in Melbourne on Wednesday. Photograph: William West/AFP/Getty Images

More than 43.9 million cases of coronavirus have been recorded worldwide with more than 1.16 million deaths, according to the latest data from Johns Hopkins University.

Melbourne’s shops, restaurants and hotels opened for business on Wednesday after a four month coronavirus lockdown, with happy customers enjoying alfresco eating in the spring sunshine and shopkeepers hoping for big sales to make up for lost revenue. The state of Victoria and its capital Melbourne, Australia’s second most populous city, has been the epicentre of Covid-19 infections, but the strict lockdown has ended a second wave, with only two new cases and two deaths overnight.

India’s tally of coronavirus cases stood less than 10,000 away from the grim milestone of 8 million, as 43,893 new cases were reported in the last 24 hours, data from the federal health ministry showed. Totalling 7.99 million, India has the second-most number of confirmed cases after the United States, which has a tally of 8.7 million. The daily increase had been dipping in India since a peak in September, but health experts warn that the numbers could surge again during the ongoing Hindu religious festival season. Deaths in India have been relatively low, totalling 120,010, out of which 508 deaths were reported in the last 24 hours.

Hospitals are running out of beds across Europe and struggling to tend to patients as a surge of coronavirus infections, including a rise in cases among staff, overwhelms intensive care units.

Authorities in Belgium have warned that all of its intensive care beds could be full within a fortnight, and a suggested transfer of some patients to the Netherlands was rebuffed as the Dutch have also run out of hospital capacity and began airlifting patients to Germany last week.

The Italian government is preparing to unveil a funding package for businesses penalised by the latest coronavirus restrictions as it scrambles to quell growing unrest as daily infections hit a new record high and Covid-19-related deaths jumped. The prime minister, Giuseppe Conte, is under pressure to act quickly after hundreds of people protested in towns and cities across the country on Monday night against measures that include the 6pm closure of bars and restaurants and the complete closure of gyms, swimming pools, cinemas and theatres. Violence at demonstrations in the northern cities of Milan and Turin, where there were clashes with police and shops were ransacked, has been blamed on extremist groups. Events in 30 other locations, including Treviso, Verona, Rome, Naples, Salerno, Bari and Palermo, were mostly peaceful. Business owners held another demonstration outside parliament on Tuesday and more are planned in the coming days.

In Spain, the government’s decision to declare a state of emergency and impose a nationwide curfew brought hundreds of protesters out on to the streets of central Barcelona. Many of the demonstrators were calling for greater investment in public services as the country endures the second wave of the pandemic. Some carried signs reading: “More healthcare, fewer soldiers” and “Cutting back healthcare kills”. Although the Barcelona protest, organised by a handful of political groups including the far-left Popular Unity Candidacy party, was called off more than an hour before the 10pm-6am curfew began, some demonstrators remained on the streets, clashed with police and set fire to rubbish bins.

British prime minister Boris Johnson is being put under pressure for a new lockdown with the government working on the assumption the second wave of coronavirus will be more deadly than the first, the Telegraph newspaper reported. More than 61,000 deaths involving Covid-19 have now occurred in the UK, statistics published yesterday show.

President Emmanuel Macron will give a televised address on Wednesday evening, while BFM TV reported the government has been exploring bringing in a national lockdown from midnight on Thursday.

German chancellor Angela Merkel wants state premiers on Wednesday to agree to close all restaurants and bars from November 4th in a bid to curb coronavirus infections but keep schools and nurseries open, a draft resolution seen by Reuters showed. Under the new restrictions people would only be able to go out in public with members of their own household and one other household, said the resolution. It said people would be punished if they broke the rule, but did not give further details. It said an exponential increase in infections in almost all regions of Germany meant that many local health authorities could not track and trace all infections so it was necessary to significantly reduce contact between people now in the hope that extensive restrictions are not required over Christmas. If the leaders of Germany’s 16 states agree to the draft during a telephone conference later on Wednesday, fitness studios, discos and cinemas will close along with theatres, opera houses and concert venues.The number of confirmed coronavirus cases in Germany increased by 14,964, data from the Robert Koch Institute (RKI) for infectious diseases showed on Wednesday. The reported death toll rose by 27, the tally showed.

Russia on Wednesday recorded 16,202 new coronavirus cases and a record high 346 deaths in the last 24 hours, pushing the national death toll to 26,935. With 1,563,976 infections, the country of around 145 million has the world’s fourth largest number of cases, behind the United States, India and Brazila

Nearly half a million people have contracted Covid-19 in the United States over the last seven days, according to a Reuters tally, as new cases and hospitalisations set records in the Midwest.

The United Nations cancelled all in-person meetings at its New York headquarters after five people in Niger’s UNmission were infected.

The Chinese province of Xinjiang had 22 confirmed coronavirus cases Tuesday, according to statement from the National Health Commission.

China has tested nearly three million people in Xinjiang to tackle a small cluster of coronavirus cases, in the latest example of the country’s aggressive approach to bringing new outbreaks under control. While new infections in China have mostly remained below 100 a day since mid-August, with most of them imported from overseas, the nation continues to see small flare-ups. In total there were 42 confirmed cases in China Tuesday.

The number of confirmed cases in the coronavirus outbreak in South Korea stands at 26,146, according to data from the Korea Disease Control and Prevention Agency. There were 103 new coronavirus cases in 24 hours versus 88 a day earlier. Total deaths rose by one to 461.

Iranians are being too lax in complying with restrictions, the government said, as the hardest-hit Middle Eastern country faced new daily records of infections and deaths.

The first generation of Covid-19 vaccines “is likely to be imperfect” and that they “might not work for everyone”, UK Vaccines Taskforce Chair Kate Bingham said on Tuesday.

The Russian Direct Investment Fund (RDIF) has submitted applications to the World Health Organisation for an Emergency Use Listing and prequalification of its coronavirus vaccine, Sputnik V.

Global shares slipped on Wednesday as coronavirus infections grew at an alarming pace in the United States and Europe, while uncertainty over next week’s US elections added to a “risk off” tone.

US president Donald Trump acknowledged that a coronavirus economic relief deal would likely come after the November 3rd election, with the White House unable to bridge differences with fellow Republicans in the US Senate as well as congressional Democrats.–PA, Reuters, Guardian, Bloomberg