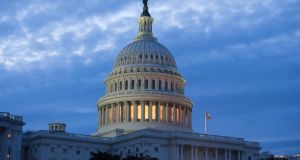 More than 20 members of the US Congress have warned Theresa May that a future free trade deal between the US and UK could be delayed indefinitely if a hard border returns between Northern Ireland and the Republic. Photograph: Michael Reynolds/EPA.

More than 20 members of the US Congress warned that a future free trade deal between the US and UK could be delayed “indefinitely” as they called on Theresa May to ensure there is no return to a hard border in Ireland.

In a letter sent to the British prime minister on the eve of the Taoiseach’s visit to Washington to mark St Patrick’s Day, the bipartisan group calls on Mrs May’s government “to do everything in its power” to prevent the imposition of a hard border between the Republic and North.

The letter was spearheaded by Richard Neal, the chairman of the House Ways and Means Committee, and Joe Kennedy III, a Massachusetts congressman and grandson of Bobby Kennedy.

“The consequences of the decisions you will make in the coming days will affect millions of people around the world,” the letter states. “The United States has a keen interest in many of the issues under discussion.”

It warns that there is “much at stake” if a hard border is reimposed, including major disruptions to trade and commerce, the stoking of political and sectarian differences, and a potential return to violence.

“This would put at risk all that has been achieved since the Good Friday Agreement came into force in 1998,” they wrote. “Additional initiatives, such as a free trade agreement, may be delayed indefinitely if we are obligated to respond to potential crises on the island. We hope very much that such an outcome can be avoided.”

The letter continues: “The United States - our government and people- share a critical interest in the continued success of the Good Friday Agreement and the peace and prosperity it has brought to so many on the island of Ireland. Support for the Republic of Ireland and for a continued peace in Northern Ireland is strong and heartfelt in the US Congress. A continuation of the peaceful border between the two is critical for the future of all the people of both jurisdictions.”

The letter was signed by 22 members of Congress from both political parties, including Mr Kennedy, Republican Peter King of New York, Philadelphia Democrat Brendan Boyle and Elliot Engels, the chair of the foreign relations committee.

The intervention comes ahead of Leo Varadkar’s visit to Washington this week where he is due to meet US president Donald Trump and several members of Congress. A centre-piece of his visit will be the annual Speaker’s lunch on Capitol Hill on Thursday which will be attended by Mr Trump, House speaker Nancy Pelosi and members of Congress including Mr Neal.

There has been growing concern on Capitol Hill in recent months about the potential impact of Brexit on Northern Ireland.

The United States was a central player in the peace process 20 years ago, and there has been renewed interest among senior Irish-Americans about the direction of the negotiations and the possibility of a return to a hard border.

Mr Coveney raised the issue when he met secretary of state Mike Pompeo during his visit to Washington.

Mr Neal, who chairs the committee that will have sign-off on any future trade deal between the United States and Britain, has warned that the issue of the border and the future of peace in Northern Ireland will weigh heavily as members consider a trade deal with Britain.