Theresa May says she has secured 'exactly' what Commons asked for 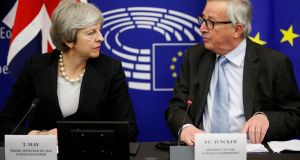 British prime minister Theresa May says she has secured “legally binding changes” to the Brexit withdrawal agreement and the Northern Ireland backstop ahead of a crucial House of Commons vote on Tuesday.

Speaking at a press conference with European Commission president Jean Claude Juncker in Strasbourg on Monday night, Mrs May said she had agreed “exactly” what parliament had asked her to, including a a means to exit the controversial backstop, which has angered many MPs.

Mr Juncker said Taoiseach Leo Varadkar had informed him that he “would be prepared to accept this solution in the interest of securing an overall deal” but he warned there would not be a third round of negotiations on the withdrawal agreement.

He appealed to MPs to support the deal, warning that there could be “no further chances” and that it is “this deal or Brexit might not happen at all”.

The agreement involves a legal strengthening of the assurances given in January by the EU through a “joint legal instrument” on the impermanence of the backstop. Mrs May insisted this would have “the same status” as the withdrawal agreement.

The text will also strengthen the ability of the UK to ask independent arbitrators in the event of deadlock caused by EU bad faith in negotiations to allow for the partial or total dismantlement of the backstop. Amendments to the political declaration on the future relationship will recommit both sides to immediate talks on a deal which will include “alternative arrangements” which can replace the backstop.

Mrs May said she still believes the withdrawal agreement “delivers on the decision taken by the British people” to leave the EU but that it was not previously made clear enough that the backstop is a temporary measures.

Now, she said, there is a “joint instrument with comparable legal weight to the withdrawal agreement will guarantee that the EU cannot act with the intent of applying the backstop indefinitely”.

Our agreement provides meaningful clarifications & legal guarantees to the Withdrawal Agreement & #backstop. The choice is clear: it is this deal, or #Brexit may not happen at all. Let’s bring the UK’s withdrawal to an orderly end. We owe it to history. https://t.co/lfy9eehEZi pic.twitter.com/XCqcLwZV7V

“If they do, it can be challenged through arbitration and if they are found to be in breach the UK can suspend the backstop. The joint instrument also gives a legal commitment that whatever replaces the backstop does not need to replicate it,” the prime minister said.

The latest version of the agreement will now be examined by the UK attorney general Geoffrey Cox, whose advice will be shared with MPs before Tuesday’s vote.

In relation to the backstop, Mr Juncker said that “if either side were to act in bad faith, there is a legal way for the other party to exit”.

“The instrument which sets out these details has legal force while fully respecting the guidelines of the European Council...It compliments the withdrawal agreement without reopening it.”

An extra Cabinet meeting took place in Dublin on Monday evening in light of the developments on the continent and Ministers were due to resume their discussions after the agreement was announced.

Ministers insisted there has been no change in the position that the UK cannot unilaterally exit the backstop.

With less than three weeks to Brexit day on March 29th — when Britain is due to leave the EU — any delay would raise renewed questions as to whether there was any way Mrs May could get her deal through the Commons. It was resoundingly rejected by a 230-vote majority by MPs in January.

The prime minister has said that if she loses the vote on Tuesday, there will be further votes on Wednesday on whether the UK should leave with no-deal and on Thursday on whether they should seek an extension to the article 50 withdrawal process.

Many at Westminster believe that in that event MPs would vote to delay Britain’s departure — to the fury of Brexiteers.

Labour leader Jeremy Corbyn said that MPs must reject the latest proposal from Mrs May when it is put to a vote on Tuesday.

“The prime minister’s negotiations have failed. This evening’s agreement with the European Commission does not contain anything approaching the changes Theresa May promised parliament,” he said in a statement. “That’s why Members of Parliament must reject this deal tomorrow.”

Mr Juncker wrote to European Council late on Monday to say that the UK must leave the EU by the time of the European Parliament elections in late May.

“The United Kingdom’s withdrawal should be complete before the European elections that will take place between May 23rd-26th this year,” he said.

“If the United Kingdom has not left the European Union by then, it will be legally required to hold these elections.”