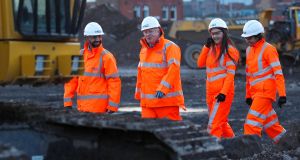 Boris Johnson has approved a controversial £106 billion (€126 billion) high-speed rail project that will cut journey times from London to Birmingham and Manchester almost in half. The project, known as HS2, has faced criticism because of cost overruns, environmental damage and its impact on house prices along the route.

Speaking in the House of Commons, the UK’s prime minister acknowledged that the decision was controversial and announced that he was appointing a minister to oversee the handling of the project.

“I cannot say that HS2 Ltd has distinguished itself in the handling of local communities. The cost forecasts have exploded, but poor management to date has not detracted from the fundamental value of the project,” he said.

The decision follows a review of HS2 Mr Johnson ordered when he took office last July, after the cost had almost doubled from £56 billion to £106 billion. The first phase of the project, a high-speed link between London and Birmingham, should be completed by 2028-2031. A second phase, linking Birmingham with Manchester and Leeds, is due to be finished by 2035-2040.

“We can try to get by with the existing routes from north to south. We can consign the next generation to overcrowding, standing up in the carriageways. Or we can have the guts to take a decision – no matter how difficult and controversial – that will deliver prosperity to every part of the country,” the prime minister said.

“A vast increase in capacity, with hundreds of thousands of extra seats, making it so much easier for travellers to move up and down our long, narrow country. That means faster journey times, extraordinarily fast journey times. Passengers arriving at Birmingham Airport will be able to get to central London by train in 38 minutes which compares favourably with the time it takes to get from Heathrow by taxi.”

Jeremy Corbyn said Labour supported HS2 and he also welcomed Mr Johnson’s announcement of £5 billion in new investment to improve bus and cycling networks outside London. But the Labour leader mocked the prime minister’s proposal to build a bridge between Scotland and Northern Ireland, which government officials have started working on, according to Downing Street.

“Why not go the whole hog and make it a garden bridge, connected to an airport in the sea? It stands as much chance of actually being built as any of those failed projects put forward by the former mayor of London. Or why not make it a cable car between Scotland and Northern Ireland, or better still a giant zip wire? The prime minister could be the first to try it out,” the Labour leader said.

Only a handful of Conservatives spoke up against the project on Tuesday, and some MPs, such as Hull’s Emma Hardy, asked the prime minister for faster rail links to their towns and cities.

“The road to Hull is paved with good intentions, and we intend to build it. We will make sure that we have Hull fully as part of our vision for High Speed North,” Mr Johnson said.