America at the Crossroads: Stephanie McCurry surveys the deep damage done by Trump 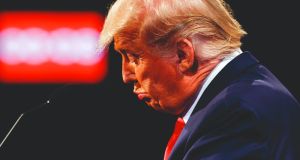 A maskless Donald Trump at the final presidential debate on October 22nd, two ays before he tested positive for Covid-19. Photograph: Getty Imanges

As I write this at my desk in New York City shortly before election day, it is impossible to shake the sense of dread. The polls show a substantial lead for Democratic Party candidate Joseph Biden. But no poll can allay the fear so many of us feel at the prospect of another four years in Trump’s America.

The United States is at a crossroads. On November 3rd we will head down path A: a Biden win and a return to the ordinary disappointments of political life; or path B: a second hair-thin Trump victory eked out via the electoral college and continued complicity in an ugly regime of authoritarian cruelty at home and abroad.

To say it has been worse than we expected is a colossal understatement. At the very beginning, in January 2017, when more than four million Americans took to the streets in the Women’s March, we protested the indignity of being led by a serial sexual predator, an openly anti-black racist and anti-immigrant president, and we feared the legislative actions of a Republican Party long committed to enriching the rich and empowering the powerful.

What we did not foresee is how Donald Trump would openly embrace white supremacists as his brand – or how he would transform the Republican Party into a cult of personality, erode customary norms about the use of executive powers, and brazenly wield those powers to malign ends.

The neo-liberal regime is pitiless. Income inequality became much worse, and so did homelessness, unemployment, food insecurity and health disparities

He seized control of major federal agencies, installing loyalists in top posts, and bent them to his will: the department of homeland security (separating migrant children from their parents at the border); the department of justice (squelching the Mueller report) and threatening “sanctuary cities”); the department of state (digging up dirt on his opponent); the Office of National Intelligence (suppressing evidence of domestic terrorism and Russian interference in the 2020 election); even the national weather service (which was forced to confirm Trump’s erroneous claims about the path of a hurricane). And, of course, the department of health and human services and the Centres for Disease Control in charge of the response to the pandemic.

We have lived through so many scandals we can only remember the most recent. I remember vaguely that President Trump was impeached; that he paid only $750 in income tax in 2016; that he came down with Covid-19, almost certainly after hosting a super-spreader event at the White House – and that he continued to attend public events in the following week, including the presidential debate with former vice-president Joseph Biden, infected and maskless.

With Covid-19 came a whole new era of powerlessness for us in Trump’s America. Certainly Americans in our current political condition, attempting to survive a global pandemic in nations led by men particularly ill-suited for the crisis. The US, Britain and Brazil have among the highest rates of infection in the world, and Britain has the highest rate of Covid-related deaths in Europe.

I look at the map and see with alarm that the infection is highest in Northern Ireland, where I grew up, now suffering the double blow of Covid and Brexit – the newest manifestation of Westminster’s longstanding disregard and disrespect for its Irish holdings. In contrast, the Republic of Ireland (I keep my passport current) is doing a better job of Covid management  - low bar I know - as are the woman-led governments of New Zealand and Taiwan.

But even among his right-wing peers, Trump has distinguished himself, the US leading first world nations in Covid infections and deaths. Just as important is what we learned early on: that the disease hits hardest in minority communities, deepening patterns of racial inequality, and health and economic disparity. Latinos and African-Americans are twice as likely to die as white people. For us the double crisis is not Covid and Brexit but Covid and systemic racism, which has been a defining feature of the US since its founding.

The US has always been a deeply divided country – but I would say that. I am, after all, a historian, and of the 19th century US no less – the eras of slavery, civil war and emancipation, and of the aftermath, Reconstruction, which ended with the violent overthrow of state governments that represented the radically democratic aspirations of new black voters.

But the near history of our deep division I would date from 2008, with the financial crash and the election of the country’s first black president, Barack Obama. As elsewhere in the world, the US economic “recovery” made a priority of bailing out the banks, investors and large corporations, leaving middle-class homeowners, the unemployed and the poor to fend for themselves. There is no social welfare net here. The neo-liberal regime is pitiless. Income inequality became much worse, and so did homelessness, unemployment, food insecurity and health disparities. The protest movement that grew up in that moment was, fittingly enough, called Occupy Wall Street. Politics spilled onto the streets.

Some commentators trace Trump’s election to the disaffection of the white working class with the Democratic Party, which was in power during the bailout. But there are other reasons for that disaffection. From Reconstruction to the civil rights revolution, as Michelle Goldberg, writes in the New York Times, “conservatives have long felt genuinely victimised by the prospect of equality”. Obama embodied that prospect, and so did the demands for racial justice that arose during his presidency. Among them was the Black Lives Matter movement, formed by three black women in 2013 in reaction to the murder of a black teenager, Trayvon Martin.

It has always been dangerous for African-Americans to insist on justice or call white supremacists to account. In 2015 a young white man walked into the historic AME church in Charleston, South Carolina and gunned down nine black people gathered in prayer. Obama gave an impassioned eulogy lamenting systemic oppression and racial subjugation, and by the end of his term, reckoning with the legacy of slavery was on the national agenda.

The backlash was predictably deadly. It brought Donald Trump to the White House in 2016, and a Unite the Right Rally to Charlottesville, Virginia in 2017, where white supremacist groups marched under the slogan “You will not replace us”. To the shock of the nation, Trump supported his troops. And so it went.

At this moment, partisan divisiveness seems complete. That some Trump voters declare themselves disaffected (mostly white women and former officials) is encouraging. The question now is whether it will be enough to prevent his re-election – or whether the shift to minority white rule will be formalised.

What I fear most is that the political conflict could easily descend into violence. My perspective as a Belfast-born US historian isn’t reassuring

I worried a lot about what will happen in the next few days and even more so about what happens after November 3rd. Trump told his Maga army to “stand by”. We are flooded with alarming news: a domestic terrorist plot to capture the sitting (Democratic) governor of Michigan; armed Trump supporters blocking access to voting sites; Trump’s insistence that the election is rigged; his administration’s attacks on voting by mail; Republican officials’ efforts to suppress the vote through legislation and the courts; and the Senate majority leader’s last-minute attempt to stack the Supreme Court by adding another conservative justice, who would cast the deciding vote if the election ends up there, as it did in 2000. There are so many things that can go wrong in our byzantine and decentralised election system.

There are more than 10,000 voting jurisdictions, many with idiosyncratic procedures. Democrats are currently litigating 200 voting rights cases. This is where we are at. Biden urges everyone to vote. Trump refuses to say he will accept the outcome of the election.

What I fear most is that the political conflict could easily descend into violence. My perspective as a Belfast-born US historian isn’t reassuring. This could be Belfast in 1968 – or South Carolina circa 1868-1876. The murderous efforts to suppress the black vote in elections during those years – by the Ku Klux Klan and other armed white supremacists – haunt me. So does the fact that they won. When there was no clear electoral college winner for the presidency in 1876, the contest was thrown to an electoral commission to decide.

It took four months to announce a winner. The murky deal cut conferred the presidency on the Republican Rutherford Hayes, but ceded the southern states to home rule by the (then white supremacist) Democratic Party, which carried out the remaining project of black disfranchisement and segregation.

As we approach November 3rd, we wait anxiously, teetering between the possibility of a Biden landslide and a competitive race, worried that the result will not be large enough to be definitive or that it will not be accepted as legitimate. Whatever you can say about 2016 when we entered Trump’s America, we weren’t in this state of democratic decay.

Given the history, what weighs on me the most are the consequences of a Trump victory for the most vulnerable people in the United States, those unable to pay their way to security, health and opportunity, or to protect themselves and their children from racial injustice and police violence.

If my dad were alive I would ask him to do a novena.

Stephanie McCurry is a professor of history at Columbia University. Her book Confederate Reckoning: Power and Politics in the Civil War was a finalist for the Pulitzer Prize for History in 2011. Her latest work is Women’s War: Fighting and Surviving the American Civil War (Harvard University Press, 2019)