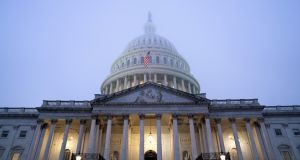 The spectacle of a US government shutdown as a result of budgetary dispute between Democrats and Republicans is but the most egregious demonstration of the impasse. Photograph: Stefani Reynolds/Bloomberg

It’s a peculiarity few visiting Europeans fail to notice: in the United States, the state, or at least those parts of it that you might encounter day to day, is quite often literally falling down. Roads, bridges and railways are in disrepair. Airports can feel shabby and public transport is patchy. Some government departments feel like they were last redecorated in the 1970s. The state of public infrastructure is a running political headache, widely recognised as holding back the country’s economic performance, and nearly every president pledges to put it right.

That distressed fabric of the US’s public space may be a convenient metaphor for the country’s ambivalence towards the state, yet it hardly denotes a weak state, still less an impoverished one. This is not a country that lacks public or industrial capacity; merely one whose priorities are elsewhere. Still, this election season in the US has shone a harsh light on another piece of decaying public infrastructure, one that really does go to the heart of the country’s political culture. American democracy is under severe strain.

In its yearly country-by-country democratic health-check, Freedom House, a Washington think-tank, this summer described the US in terms more commonly associated with unstable emerging states: “pressure on electoral integrity, judicial independence, and safeguards against corruption. Fierce rhetorical attacks on the press, the rule of law, and other pillars of democracy coming from American leaders, including the president himself.”

On the eve of an election that could end in confusion and chaos, with an incumbent president refusing to say if he will accept the outcome, it’s tempting to blame Donald Trump for this. His contempt for the rule of law, his coddling of dictators, his embrace of white supremacists and his emasculation of the Republican Party have certainly exposed the cracks in a system expressly designed to prevent one man accumulating a lot of power and using that power to attack the checks on his authority. But the rot goes deeper than Trump.

The obvious answer when faced with a challenge such as this is: vote. The franchise is the ultimate brake on democratic drift. Yet Americans are less and less engaged; turnout since the 1970s has been less than 60 per cent, and among low-income households it’s closer to 30 per cent. As individual participation has declined, corporate influence has soared, with most successful campaigns for any office of significance now dependent on tapping the vast reservoir of private money sloshing through the political process.

The system itself compounds those distorting effects. Trump won in 2016 not because he won the most votes but because of an electoral system that gives disproportionate power to small rural conservative states over bigger, liberal ones. Decades of gerrymandering and continuing voter suppression make a mockery of “one person, one vote”. In the event of a contested result on Tuesday, the winner will be chosen by an avowedly ideological institution, the supreme court, which owes its vast power to a calcified, unamendable constitution and a political system in a state of perpetual gridlock.

As the ancient Romans learned, and as the framers of the US constitution were aware, democracies have less to fear from sudden shocks than from the steady erosion of the pillars that hold them up: social trust, political compromise, shared information, a spirit of solidarity. Democracies can get stuck. Norms fall away. And that stalemate is an existential threat.

The now-regular spectacle of a government shutdown as a result of budgetary dispute between Democrats and Republicans is but the most egregious demonstration of an impasse that makes it all but impossible to enact the far-reaching laws needed to address the country’s problems.

The process has been in train for decades but accelerated after the 2008 recession, with a shrinking middle class, widening income inequality and wealthy special interests all steadily chipping away at public faith in a system that fewer and fewer people feel looks out for them. The fraying of those social bonds has coincided with the retreat, through new technologies, into isolated camps where people are not exposed to, let alone engage with, ideas that do not fit their way of thinking. Just as claims of “fake news” were rife in countries that went through democratic decline in Europe in the interwar years, the US’s poisonous factionalism has produced a civic space in which even the most basic observable facts are contested.

For Americans who feel the past four years has been a living nightmare, a defeat for Trump next week would bring a feeling of immediate relief. But Trump is a symptom more than a cause of democratic dysfunction. The decay in the system will outlive his presidency. Repairing it will be a far more daunting challenge than fixing those rundown highways.