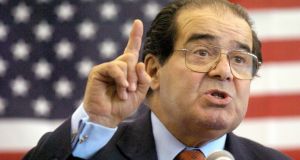 US supreme court justice Antonin Scalia, who died on Saturday at the age of 79. Scalia was appointed by President Ronald Reagan in 1986 and became a villain to liberals and a hero to conservatives. Photograph: Gavin Averill/The Hattiesburg American via AP

The death on Saturday of Conservative US supreme court justice Antonin Scalia, one of the most politically influential American judges of his generation, has set up a fierce fight between president Barack Obama and his Republican opponents in Congress.

Republicans seek to stop the president appointing a successor that would give the court a liberal edge and smooth his final-year plans for climate change and illegal immigration.

Justice Scalia (79), the long-serving supreme court justice and an outspoken leader on the court’s five-man conservative bloc, died in his sleep early on Saturday during a visit to Texas for a quail hunting trip.

Known for his razor-edged intellect, acerbic dissents and pithy turns of phrase in written opinions, Scalia was appointed by President Ronald Reagan in 1986 and became a villain to liberals and a hero to conservatives over his stands against abortion and gay rights.

His unwavering defence of originalism, the legal theory that the US constitution should be interpreted on the views of people who drafted and ratified it, steered legal debate on America’s highest court over three decades, more so than any other supreme court justice.

“For almost 30 years, Justice Antonin ‘Nino’ Scalia was a larger than life presence on the bench,” Mr Obama said.

“A brilliant legal mind with an energetic style, an incisive wit and colourful opinions, he influenced a generation of judges, lawyers and students, and profoundly shaped the legal landscape.”

Ignoring calls by senior Congressional Republicans that he defer the decision on Scalia’s replacement to the next president, Mr Obama said that he intended to nominate Scalia’s successor “in due time.”

“There will be plenty of time for me to do so and for the Senate to fulfil its responsibility to give that person a fair hearing and a timely vote,” said Mr Obama on a visit in California.

The prospect of his judicial pick winning confirmation in the Republican-controlled Congress will be difficult if not impossible, particularly during a race for the White House involving two Republican candidates who sit in the Senate.

Scalia was known for his strident conservative views

Scalia’s death has triggered a pitched political battle in Washington

The number of judges on the court, with Scalia’s death, falls to eight, comprising four conservative and four liberals, though Mr Justice Anthony Kennedy often sides with his fellow justices on the left.

The vacant seat injects a new tension into this year’s US presidential election given the court’s critical role in recent years as an arbiter on an array of social and religious issues in American public life when Democrats and Republicans can agree on little or nothing in Congress.

Presidential candidates from both parties have been stressing on the campaign trail that voters will make a critical decision in the November election given that the next White House incumbent will likely be nominating between one and four new justices to the court.

Scalia’s death makes that hypothetical scenario, issued as a warning to Republican and Democratic voters alike, a reality. The high political stakes could be seen within hours of news of his death breaking.

“The American people should have a voice in the selection of their next supreme court Justice,” said the Republican Party’s Senate majority leader Mitch McConnell. “Therefore, this vacancy should not be filled until we have a new president.”

The subject of supreme court appointments led to some of the testiest exchanges of the ninth Republican debate, held last night in South Carolina, the third state to nominate candidates on Saturday.

At the nastiest debate of the party’s no-holds-barred primary election, the two leading Republicans - businessman Donald Trump, the winner in New Hampshire’s primary, and Ted Cruz, the victor in Iowa a week earlier - clashed over appointments to the supreme court.

“The next president is going to appoint one, two, three, four supreme court justices. If Donald Trump is president, he will appoint liberals,” said Cruz, jabbing Trump on his past support of Democrats.

The businessman called Cruz a liar, saying that he supported the appointment of supreme court Chief Justice John Roberts, a judge who sided in a ruling in favour of Obamacare, Mr Obama’s signature healthcare law of his first term in office so despited by Republicans.

“I did not nominate John Roberts. I would not have nominated John Roberts,” said Mr Cruz.

“Donald, adults learn not to interrupt each other,” said Mr Cruz.

Mr Trump called Mr Cruz “the single biggest liar” at another stage in the debate where the L-word was thrown about liberally throughout.

In the opening minutes of the debate, which began with a moment’s silence to Justice Scalia, Republicans stressed the importance of the appointment of a successor but urged Mr Obama not to nominate a justice, claiming that it was unprecedented during an election year.

“It underscores the stakes of this election,” said Mr Cruz. “We are one justice away from a supreme court that will strike down every restriction on abortion adopted by the states.”

Florida senator Marco Rubio said Mr Obama should not appoint a justice because it had been over 80 years since “a lame-duck president” made a Supreme Court appointment - a point repeated by Mr Cruz.

When CBS debate moderator John Dickerson corrected him that Justice Kennedy was confirmed during an election year (1988), the Republican audience booed him for contradicting Mr Cruz with a fact.