Alienation over Trump and Clinton leaves Senate contest in disarray 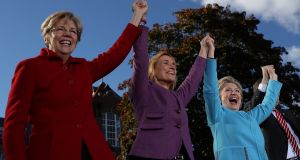 On a brisk New Hampshire morning, Marc Tetrenault walks with friends on the campus of leafy St Anselm College in Manchester as Hillary Clinton’s playlist pumps out of speakers at her rally nearby.

Tetrenault is walking away from the music. He will not be voting for the Democratic presidential nominee in this election.

“I will be voting for the libertarian Gary Johnson because Donald Trump is too aggressive for me in name-calling and I don’t like his attitude and Hillary Clinton I don’t trust enough,” said Tetrenault (22) from Oxbridge, Massachusetts, defying the autumn cold by wearing shorts.

It is not the only thing the young man from Oxbridge, Massachusetts is defying.

“I am definitely libertarian leaning but I am not against voting for Democrats and Republicans,” he said.

Tetrenault intends to vote for the Granite State’s governor Maggie Hassan, a Democrat, in the race for the US Senate seat held by Republican Kelly Ayotte, and Frank Guinta, the sitting Republican congressman in New Hampshire’s first congressional district. He typifies the unconventional split-ticket voting encouraged by this topsy-turvy election with two disliked presidential candidates.

The alienation many voters like Tetrenault feel about Trump and Clinton in the US presidential race has thrown another contest into disarray: control of the US Senate.

Two polarising candidates sitting at the top of the party tickets this year complicates traditional voting patterns that could lead disaffected voters to change their traditional party allegiances when voting for congressional candidates “down the ticket”.

About a third of the Senate’s seats are up for grabs in any one election and this year Republicans, who hold a four-seat majority in the 100-seat chamber, are on the back foot, defending 24 of the 34 seats in contention on November 8th. If the Democrats pick up four seats, regaining the majority they lost in the 2014 midterm wipe-out, and Clinton wins the White House, vice-president Tim Kaine will hold the deciding vote in the Senate, giving the first US female president the upper hand in Congress.

This would significantly ease the burden of the Senate confirmation she requires for about 1,000 of the estimated 4,000 appointments that must be made from January in the new Clinton administration (if she’s elected).

FiveThirtyEight, an online election prognosticator, has put the odds of a Democratic senate takeover at 66.5 per cent.

The Republican-majority in the House of Representatives, the largest since 1928, is likely to remain. Democrats would need a net gain of 30 seats to take control of the House for the first time in six years.

Despite the party’s best efforts to tie “down-ballot” candidates to Trump’s hot-mic “locker-room” comments about sexually assaulting women and the accusations of sexual misconduct against him, those kind of gains would appear to be beyond the Democratic Party, even in this unpredictable election.

“It is a bit of a stretch. The nice thing about having the big advantage that we have is that we can take losses and hold power,” said Mike Murphy, the veteran Republican consultant and anti-Trump stalwart.

The 2010 redrawing of congressional districts created a heavily gerrymandered electoral map, whittling the number of swing seats in the House down to between 35 and 40 out of 435 in total.

A Democratic gain of 10 to 15 seats, which polls suggest is likely, may not swing the House back but it would make the US Congress even more ungovernable during a Clinton administration as Republican speaker Paul Ryan would likely lose more moderates and be left with an even more rebellious conservative faction to manage.

Clinton and her top campaign surrogates, including president Barack Obama and vice-president Joe Biden, spotting potential congressional wins, have extended their attacks beyond Trump to Republican candidates seeking a return to Washington.

The Clinton camp has injected money into state races in an effort to win marginal congressional races hoping to bring candidates in on Clinton’s coat-tails (if she wins).

Republicans have embarked on a last-gasp spending splurge in the hope of boosting candidates burdened by association with their unpopular presidential nominee.

“They are worried and any political scientist will tell you that the traditional analysis would say that we are going to lose the Senate because we are going to have a bad presidential outcome and many of our senators are running in hostile states in a presidential year,” he said.

They have tried to appeal to voters who like Trump but appear anti-Trump enough to those who don’t. Others, such as veteran Republican senator John McCain in Arizona, have all but thrown in the towel on the party’s presidential aspirations and appealed to voters to re-elect them as a check on Capitol Hill against another Clinton White House.

Fighting to retain a seat in her fiercely independent state, Ayotte has belatedly come around to this position too after adopting various contorted positions in response to the blizzard of Trump controversies.

“Ayotte and the rest of the Republicans essentially decided to wager on Trump not imploding and now, two weeks out, that doesn’t look like a good bet, but maybe that was the only option for her,” said Dante Scala, a politics professor at the University of New Hampshire.

The desperate 11th-hour pivots appears weak coming after months of trying to send a “dog-whistle message” – as Murphy puts it – to voters opposed to Trump.

“My counsel has been for most of them is to walk away from Trump early because I believe that the Republican vote will still turn out for them. But very few of them have had the guts to do that,” he said. “They have tried to please both sides which means they please neither.”