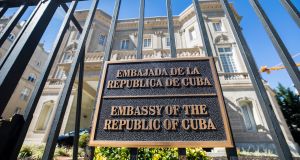 The Trump administration expelled 15 Cuban diplomats from the embassy in Washington in an escalating response to mysterious illnesses afflicting US eEmbassy personnel in Havana.

The expulsions were intended to force the Cubans to operate their embassy in Washington under the same emergency conditions that the United States is now operating under in Havana, the US said.

The Trump administration decided last week to pare its staff in Havana down to a skeletal group of just 27 people who can carry out emergency services.

A State Department official said that the Cuban government would need to give a clear assurance that the attacks would not continue before the personnel in either embassy could return.

The expulsions represent yet another step in the administration’s gradual unwinding of the Obama administration’s rapprochement with Cuba, a reopening welcomed by much of Latin America and Europe - but criticised by many Cuban emigrants now living in Florida and elsewhere.

In a briefing with reporters Tuesday morning, State Department officials said that the Cuban ambassador in Washington was informed of the expulsions in a 9am phone call.

The expelled embassy personnel must be out of the United States within seven days. By then, the US embassy in Havana will have completed its own drawdown.

The actions are in retaliation for a worrisome series of illnesses that began affecting US diplomats and their spouses last December.

By late January, the administration had decided the illnesses were related and may have resulted from some sort of attack, perhaps by a sonic device, toxin or virus.

In a press statement, US Secretary of State Rex Tillerson said the United States was expelling 15 Cuban diplomats “due to Cuba’s failure to take appropriate steps to protect our diplomats in accordance with its obligations under the Vienna Convention.”

Mr Tillerson added that “this order will ensure equity in our respective diplomatic operations.”

State Department officials emphasised that they are not accusing the Cuban government of complicity in the attacks. “We continue to maintain diplomatic relations with Cuba, and will continue to cooperate with Cuba as we pursue the investigation into these attacks,” Mr Tillerson said.

While Trump administration officials stressed that their action did not amount to a change in US policy toward Cuba or an end to diplomatic relations between Washington and Havana, the practical effect will be a stark turnaround in the relationship and a return to the days preceding the Obama administration detente, when the two countries’ dealings were dysfunctional and fraught with suspicion.

Proponents of the move toward normalisation said the action threatened to create a new chapter of hostility between Cuba and the United States, playing into the hands of those who wish to reverse the thaw.

It would be especially damaging, they argued, if - as some current and former officials suspect - the Cuban government is not even behind the attacks and the chill were to continue indefinitely.

“If this is not the government, but rather other forces seeking to undermine the US-Cuba relationship, a permanent downgrade would accomplish that objective for them,” said Benjamin J Rhodes, the former Obama administration deputy national security adviser who helped to negotiate the move toward normalisation.

The number of staff thought to have been affected has gradually grown over the months, and on Tuesday the State Department added one more to the list, bringing the number to 22.

Some of those affected reported hearing odd sounds in particular rooms of their homes, leading some experts to speculate that some kind of sonic weapon or faulty surveillance device may have been at fault.

The administration expelled two low-level Cuban diplomats in May in response to the illnesses, but with more diplomats and their spouses becoming ill in the months since, calls grew on Capitol Hill for a more forceful response.