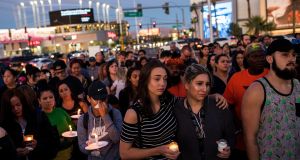 Las Vegas metro police believe Stephen Paddock, the 64 year-old American man who killed at least 59 people during a gun rampage on Sunday, acted alone, though the search continued overnight for a motive for the attack.

As the focus of the investigation turned to Paddock’s background, police raided houses in Reno, Nevada and the town of Mesquite about 130 km (80 miles) northeast of Las Vegas. Firearms, explosives and electronic devices were found at both locations.

Paddock, who is understood to have taken his own life before police raided his hotel suite on the 32nd floor of the Mandalay Bay hotel, was found dead with dozens of weapons in the two-bedroom suite from where he launched the attack. It is believed Paddock, who checked into the hotel last Thursday, transported the ammunition from his car to his room using bags or suitcases.

At least 59 people were killed and 527 people were injured after the assailant opened fire on the crowd that had gathered for a country music festival.

Police also found several pounds of the explosive Tannerite at Paddock’s home, and traces of ammonium nitrate in his car parked at the hotel.

All bodies had been removed from the site of the Route 91 Harvest Festival, he confirmed.

Mr Fasulo also requested that the public refrain from bringing fresh food to support facilities. “While the gesture is appreciated, metro (police) does not have the ability to co-ordinate delivery or distribution,” he said.

Families who were concerned about loved one’s should visit the Las Vegas Convention Centre, he urged, as he thanked the city’s medical staff for their efforts since the gunman opened fire late on Sunday night.

Most of those wounded in the attack were rushed to the University Medical Center in the north of the city and Sunrise Hospital to the east, which admitted 214 victims of the attack and undertook 90 emergency surgeries.

Earlier in the evening, the mayor of Las Vegas, Carolyn Goodman, led a multi-faith vigil at City Hall to mark the events that have devastated the city of 600,000 people.

In downtown Las Vegas, much of the famous central strip remained sealed off on Monday night, while the lights along the strip remained in darkness, in honour of the victims of the attack.

As the area directly in front of the Mandalay Bay hotel remained sealed off, a large electronic billboard outside the hotel read: “Our prayers for the victims, our gratitude for the first responders.” Inside, hotel staff offered free beverages and pastries to guests who remained in the hotel.

Paddock was a high-stake gambler and regular visitor to Las Vegas. An accountant, who also had real estate interests, he had lived in several retirement communities around Nevada with his girlfriend.

His father, who was estranged from his family for most of his life, spent time on the FBI’s most wanted list in the 1960s and 1970s, Paddock’s brother Eric said.

He expressed shock at the news: “We know nothing. If you told me an asteroid fell it would mean the same to me. There’s absolutely no sense, no reason he did this,” he told US media.

US president Donald Trump, who is due to visit Las Vegas on Wednesday, described the atrocity as “an act of pure evil.”