Do not use Irish Border as test case for EU-UK border, says Barnier 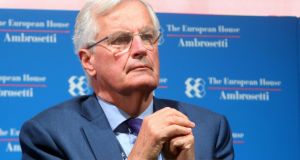 The European chief negotiator Michel Barnier called on Britain not to use the Irish Border as a test case for wider Brexit border issues. Photograph: EPA

The EU’s chief Brexit negotiator Michel Barnier has said the Irish Border issue cannot be used as a “test case” for the wider UK-EU border arrangements.

Speaking to journalists in Brussels after the publication of the EU’s “Guiding Principles on the Dialogue for Ireland/Northern Ireland”, Mr Barnier was sharply critical of aspects of the UK position enunciated in its negotiating paper two weeks ago.

He warned the Commission was not prepared to allow the unique Border arrangements which would be agreed for Ireland to become a template for the UK’s broader deal with the EU.

“What I see in the UK’s paper on Ireland and Northern Ireland worries me,” Mr Barnier said.

“The UK wants the EU to suspend the application of its laws, its Customs Union, and its Single Market at what will be a new external border of the EU. And the UK wants to use Ireland as a kind of test case for the future EU-UK customs relations. This will not happen.”

The Commission’s paper was welcomed by the Government as evidence of the “continuing close engagement between Ireland and the EU task force” . Its “principles which will form an important basis for negotiating ...solutions with the UK,” the statement said.

Mr Barnier also set out explicitly for the first time what EU Brexit negotiators see as key progress in the union’s Irish strand of the “divorce” talks with the UK.

“Sufficient progress”, the key yardstick to allow talks to continue to talks on the future EU-UK relationship, he made clear, will constitute political agreements to safeguard the Common Travel Area and the dozen cross-Border programmes and institutions which are referred to in the Belfast Agreement and are enshrined in EU and British law. Only in the second-phase talks will trade issues and the border be negotiated.

Mr Barnier also made an unambiguous commitment on behalf of the EU to continuing the funding of the peace process and stated that in this respect the UK also “needs to honour their commitments”.

The four-page paper does not provide any specific solutions for the many challenges that Brexit will pose in Ireland. It insists, as Mr Barnier has repeatedly done, that it is the responsibility of the UK to spell out such solutions and “ensure that its approach to the challenges of the Irish Border in the context of its withdrawal from the European Union takes into account and protects the very specific and interwoven political, economic, security, societal and agricultural context and frameworks on the island of Ireland”.

Ensuring the avoidance of a hard border on the island of Ireland is central to protecting the gains of the peace process underpinned by the Belfast Agreement, the paper argues. It accepts that a new border arrangement on the island will be unique in the EU, but insists these solutions must respect the proper functioning of the internal market and the Customs Union, as well the integrity and effectiveness of the EU’s legal order.

Mr Barnier said that he was personally and politically deeply committed to the Irish strand of the talks, a commitment, he said that went back to discussion in the mid-90s with “Nobel winners” John Hume and David Trimble who had impressed on him their sense of the importance of the EU engagement to the peace process.

In defending the Commission’s assessment of the UK’s “surviving” financial obligations - put by some as as high as €100 billion - Mr Barnier expressed disappointment at what he said seems the UK’s “backtracking on the original commitment to honour its past commitments,” he said.

This problem was a moral one, he said. “You cannot have 27 countries paying for commitments made by 28.” The UK has claimed that it does not have a legal obligation to meet the financial commitments agreed by it and the other 27 member states in the union’s seven-year financial framework.

Mr Barnier said the UK’s aspiration to get free access to the single market after it had left the union position was unrealistic: “It will not be possible for a third country to combine the benefits of the Norway model with the weak constraints of the Canada model,” he said.

* A demand for the UK to legislate for the “continued protection” of special foods such as Parma ham and feta cheese, as well as French burgundy and Spanish cava. Brussels wants to ensure that more than 3,300 food and drink products are protected from British copycats after Brexit.

* Ensuring that any goods in transit on Brexit day would be subject to the jurisdiction of the European Court of Justice. In effect, British companies and the British government would be liable to fines from Brussels for breaking EU VAT and customs rules.

* A warning to the UK government that it must guarantee EU data protection standards on classified EU documents. If not, the EU wants these documents erased or destroyed.

* Asking Britain not to discriminate against EU companies which are carrying out state-funded infrastructure projects that began before Brexit.