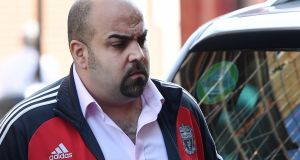 Hisam Choucair arrives for a commemoration hearing on day two of the Grenfell Inquiry in Central London. “In one night I have lost half of my family.” Photograph: Andy Rain/EPA

A woman collapsed outside the Grenfell Tower inquiry on Tuesday after footage of the burning building was shown on screen without warning.

The film had formed part of a commemoration to the Choucair family, three generations of whom died in the fire.

Inquiry staff were supposed to notify those in attendance, including many survivors and bereaved relatives, before images of the tower appeared.

Instead, phone camera footage flashed on both screens at the Millennium Gloucester Hotel, South Kensington, showing flames engulfing the block.

Huge distress instantly washed over the room and many of those affected could be seen burying their faces in their hands. People then began flooding from the room in tears.

Their cries could be heard from the hallway.

Bernard Richmond QC, counsel to the inquiry, was forced to pause the video. Several minutes later, he said: “Somebody has collapsed outside and is being dealt with, so if you could stay in the room that would be very helpful.”

It was unclear who had collapsed.

The footage had been initially stopped because colourful lights began flashing in the room. It transpired this was caused by the medical emergency unfolding outside, as someone had hit a switch by accident.

Acknowledging his failure to warn survivors about the imagery, Mr Richmond said: “I’m sorry that the warning that should have been put out didn’t get put out.”

The development came towards the end of a second emotional day at the inquiry.

Thirteen victims had been commemorated: Debbie Lamprell, Maria del Pilar Burton, Rania Ibrahim, her daughters Fethia and Hania, Khadija Saye, Mary Mendy and the six members of the Choucair family. Hesham Rahman was also due to be honoured.

Hisam Choucair, brother of Nadia and the son of Sirria, told the room he had harboured misgivings about Grenfell Tower.

He added: “In one night I have lost half of my family. I feel like a stranger now. It has destroyed everything. I feel like part of me has been taken away.

“When I go past and look at the tower I have flashbacks. I know they are just pictures on my head but I can actually see people in the windows, dying, trying to get out.”

Earlier in the day, chairman of the inquiry Sir Martin Moore-Bick had been presented with a painting of Grenfell Tower’s burnt-out skeleton.

Titled Eyesore: The Final Straw, the picture was created by Ms Mendy’s cousin, Damel Carayol, who also gave a copy to prime minister Theresa May recently.

It quoted Sir Martin’s own pledge to uncover the facts behind the tragedy, saying “work until truth is laid bare”.

Personal tributes from bereaved relatives and friends of Grenfell Tower victims will continue into next week, before the formal evidence hearings begin. – PA