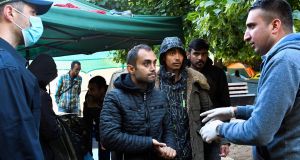 A police interpreter (right) with a group of migrants during the evacuation of a makeshift camp in a Sarajevo park. Officials say that some 4,000 migrants have entered Bosnia this year. Photograph: Elvis Barukcic/AFP/Getty Images

Bosnian Serb president Milorad Dodik has claimed that a surge in the number of migrants arriving in Bosnia is part of a conspiracy to boost its Muslim population, as political wrangling over the issue exacerbates ethnic divisions in the troubled state.

Officials say that some 4,000 migrants have entered Bosnia this year – compared to just 755 in 2017 – and up to 2,500 are now in the country as people continue to arrive via Montenegro and Serbia, and tighter border controls in EU-member Croatia make it harder for them to keep moving northwards.

The rise in people coming from the Middle East, Central Asia and Africa is straining already fractious relations between Bosnia’s Serb, Croat and Muslim (or Bosniak) communities, and is being used for political gain in an election year.

“We don’t want to be in a position where some 50,000-100,000 migrants are stationed here,” Mr Dodik told local media, insisting that Serb-run Republika Srpska wanted to move migrants on quickly to Bosnia’s other region, the Muslim-Croat Federation.

“But even that is dangerous for us. Three years after they receive asylum, those migrants could get the Bosnian citizenship. Should they get it, they could move freely across the country... That could create a series of problems,” the N1 television channel quoted him as saying.

Mr Dodik went on to claim that a “hidden Sarajevo structure” wanted to settle Muslim migrants in Bosnia to “strengthen their position here and then, in some four, five, 10 years say that there is a clear Bosniak, meaning Muslim majority in the country. That’s the idea, that’s what (official) Sarajevo is doing.”

The Serb nationalist offered no evidence for his claims, and almost all arriving migrants want to head for wealthy EU states rather than stay in Bosnia, which has struggled to recover from an interethnic 1992-5 war.

Ahead of national elections in October, Bosnian Serb politicians have lambasted the handling of the migration situation by the state government in Sarajevo - reinforcing Mr Dodik’s repeated claim that Bosnia is dysfunctional and only he can defend the interests of its Serbs.

Relations between the state government and ethnic Croat officials also frayed last Friday, when for several hours police in a mostly Croat district blocked buses taking migrants from parks in Muslim-majority Sarajevo to accommodation near Mostar.

“For a police commissioner to make a decision preventing state institutions from implementing their constitutional duties is a sort of serious coup,” said Bosnian security minister Dragan Mektic.

“This is a blow to the constitutional order of the state.”

Bosnia’s main ethnic Croat party, the HDZ, said the transfer of migrants was “illegal” and intended to “destabilise the area”, and claimed that it was “well known that the arrival of migrants in most areas results in unrest.”