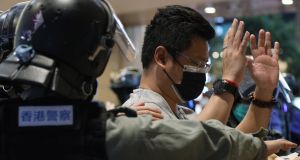 The prime minister described the law as a serious breach of the Sino-British joint declaration that guaranteed a high level of autonomy for Hong Kong after Britain returned the city to China in 1997 after 156 years of colonial rule.

More than 300,000 people in Hong Kong hold British National Overseas (BNO) passports and a further 2.6 million are eligible for them. All such passport holders will be allowed to move to Britain with their dependents for up to five years. At that point, they will be able to apply for settled status and a year later for full British citizenship.

Foreign secretary Dominic Raab told the House of Commons there would be no quota on numbers eligible to come to Britain.

“This is a special, bespoke set of arrangements developed for the unique circumstances we face and in the light of our historic commitment to the people of Hong Kong. All those with BNO status will be eligible, as will their family dependents who are usually resident in Hong Kong, and the home office will put in place a simple, streamlined application process,” he said.

Labour’s shadow foreign secretary Lisa Nandy welcomed the move but suggested it did not go far enough. She said it must not become a scheme for wealthy people to abandon Hong Kong and leave others behind. And she called on the government to expedite the introduction of legislation similar to the US Magnitsky Act which imposes sanction on Russian figures involved in human rights abuses.

“The foreign secretary’s commitment to BNO passport holders is welcome, but it does not resolve the problem. I was deeply moved to see the young activists who bravely took to the streets to protest against this law, at considerable personal risk. The majority will not be covered by this scheme and must not abandoned,” she said.

“The loss of many highly skilled workers will be a blow to Hong Kong and to China. That is why we need additional measures. We in this House have been waiting for Magnitsky legislation for two years now. He must give us a date for when that will be introduced before the summer recess, so that targeted sanctions can be applied to those who breach human rights in Hong Kong.”