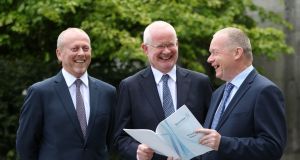 Up to half of Irish companies that trade with the UK are still to apply for the customs number that forms “the foundation” of Brexit preparation, the Revenue Commissioners has warned.

Revenue chairman Niall Cody said a “significant proportion” of business that it had identified as trading with the UK were “running a real and unnecessary risk” of customs delays if they did not register for the Economic Operators’ Registration and Identification number.

This is despite a 110 per cent increase in applications for these numbers in 2019 to date compared with all of 2018.

Revenue commissioner Gerry Harrahill said some businesses appeared to be holding back on their preparations.

“If Brexit happens at short notice, quite honestly it will be too late for businesses to do the impact assessment at that stage.”

Revenue has hired 512 staff this year, bringing its workforce to a full-time equivalent size of 6,419. It hired 638 people during 2018 against a backdrop of staff retirements and technological change, it said at the launch of its annual report in Dublin on Thursday.

More than 400 customs officers have been employed to cope with challenges posed by Brexit, with the recruitment process last September attracting more than 3,000 applications.

Revenue estimates that it needs “closer to 600” staff to deal with Brexit, and the hiring of a further 200 employees is likely to be fast-tracked closer to the UK’s departure from the European Union.

Mr Cody said the organisation had the flexibility to redeploy other staff, which it will have to do in the event of a no-deal Brexit.

“Our overarching priority and objective is to facilitate the efficient and timely movement of legitimate trade.”

Alongside its annual report, Revenue published an analysis of corporation tax highlighting the contribution of “a small number” of large companies.

The €2.2 billion increase in corporation tax receipts in 2018, which was up almost 27 per cent on the year before, was mainly driven by higher receipts from manufacturing sector companies and increased payments from large multinationals operating in Ireland, Revenue noted.

The 10 largest payers generate 45 per cent of 2018’s total corporation tax receipts of €10.4 billion, the analysis confirms. This share of what is the third-largest category of tax has risen from 39 per cent in 2017.

The analysis also showed the cost to the exchequer of the research and development tax credit has declined, which Mr Cody said was most likely the result of a small number of projects coming to an end.

Under the new system of PAYE reporting through employer payrolls, Revenue has since January received 1.3 million payroll submissions from almost 157,000 employers, it said.

The data related to total gross salaries of almost €24 billion for more than 2.6 million employees and pension recipients.

Mr Cody said this transition to the new reporting requirements had been “smooth”. Employees can view their PAYE details through their Revenue MyAccount login from next Wednesday as part of the next phase of the process.

Meanwhile, this year’s online pay-and-file deadline for self-assessed taxpayers has been confirmed as November 12th. The paper deadline is October 31st.