UK government tries to win over DUP in ‘constructive’ talks 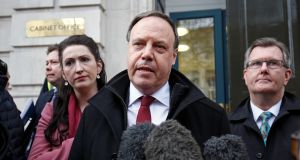 Talks between the British government and the DUP are expected to continue through the weekend after what the party’s deputy leader Nigel Dodds described as good and constructive discussions in London on Friday.

The government is seeking to persuade the DUP to back Theresa May’s Brexit deal next week in the hope that most Conservative Brexiteers will follow suit.

“We have had good discussions today. Those discussions will continue over the coming period of time. We want to get a deal. We’ve always been in that frame of mind. We don’t want to leave without a deal but a lot will depend in terms of what the government is able to do in terms of providing the guarantees that are necessary to assuage our concerns,” Mr Dodds said.

Mr Dodds said he was disappointed that the assurances the prime minister won this week were not enough to persuade the attorney general that the risk of being trapped indefinitely in the backstop had disappeared.

“From day one our focus has been on the red line of how NI is treated separately from the rest of the UK. That is the issue that has been the priority concern for us,” he said.

Much of the DUP’s focus in the negotiations has been on paragraph 50 of the December 2017 joint report in which Britain agreed to a backstop to ensure that there could be no hard border in Ireland. It said the United Kingdom would ensure that no new regulatory barriers develop between Northern Ireland and the rest of the UK unless the Stormont institutions agreed to them and it guaranteed the North unfettered access to the entire UK market.

“That needs to be addressed and the overall situation of how the UK as a whole, the economic integrity of the internal market utterly protected for NI going forward. What we are doing is continuing to discuss that issue, continuing to discuss how that can actually be provided for, how we can protect the internal market of the United Kingdom,” he said.

Mr Dodds said the fact that Mr Hammond attended the meeting should not be interpreted as evidence that the DUP was seeking cash in return for supporting the deal.

“We’re not discussing cash in these discussions. This is about Brexit and how we can protect the future of the United Kingdom and protect Northern Ireland’s economic and political future,” he said.

Mrs May is expected to bring her Brexit deal back to the House of Commons next Tuesday before travelling to Brussels on Thursday to request an extension to the article 50 deadline that would postpone Britain’s departure from the EU by at least three months.