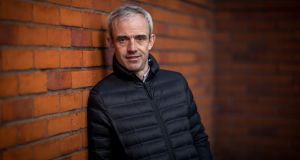 A philosophical Ruby Walsh on Brexit: ‘What will happen will happen’ Photograph: INPHO/Morgan Treacy

Ruby Walsh, the Cheltenham Festival’s all-time leading jockey, is more concerned about a hard Irish border than the extra paperwork, taxes and travel complications that horseracing could face post-Brexit.

Previewing next week’s festival – National Hunt racing’s premier meeting of British and Irish horses – the Kildare-based rider was stoic about the changes that might come for horseracing and the bloodstock industry two weeks after the festival when the United Kingdom is due to leave the European Union.

Speaking at Paddy Power’s offices in Dublin where he is the bookmaker’s “brand ambassador,” the 39-year-old jockey said that the issue with Brexit revolves around much more than sport.

“What I worry about Brexit will be what will happen in the North; will they rebuild the Border and what that does to the emotions of the people living up there,” he told reporters.

“What happens as regards the movement of horses or trade and all of that – yeah, it will be awkward and it will cost a few quid but we will all get used to it and it will become normality. But if they build a [hard] border in Northern Ireland again, what damage that does could be irreversible.”

Cheltenham will be the biggest race meeting involving Irish- and British-trained horses before Brexit, and there are fears the Aintree Grand National festival in early April could be a no-deal Brexit’s first casualty.

Mr Walsh said Brexit would have a bigger impact on people commuting between Ireland and the UK for work every week than on those attending Cheltenham or Aintree.

“We can jump up and down about the importance of ourselves but I think there is way more and bigger communities that Brexit is going to affect harder than us,” he said.

Horseracing Ireland has warned that a hard Brexit, which is increasingly possible given the opposition to the proposed deal at Westminster, would be “catastrophic” for the movement of horses to and from Ireland.

A tripartite agreement, currently in operation under EU law, permits the movement of, and trade in, horses between Ireland, Britain and France without veterinary inspections or health certificates.

Mr Walsh, who has a partnership with trainer Willie Mullins, said he can “survive” Brexit because the Common Travel Area, the decades-long travel arrangements that guarantee the free movement of people between Ireland and the UK, would continue after Britain’s exit.

“Thankfully I only have to worry about Ruby. Willie has to worry about all the horses,” said Mr Walsh, who has had 58 winners at Cheltenham over 20 years and been crowned the festival’s leading jockey 11 times.