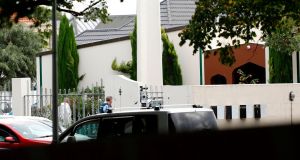 Security officials guards at the mosque Masjif Al-Noor after a gunman filmed himself firing at worshippers inside in Christchurch, New Zealand. Photograph: Tessa Burrows/AFP/Getty Images

On Friday, a man in his late 20s strapped on a helmet camera, loaded his car with weapons, drove to a mosque in Christchurch, New Zealand, and began shooting at anyone who came into his line of vision. He broadcast the act of mass terror live for the world to watch on social media.

Forty-nine people were killed in the attack, which occurred at two different mosques in the city. A 17-minute video of a portion of the attack, which leapt across the internet faster than social media censors could remove it, is one of the most disturbing, high-definition records of a mass casualty attack of the digital age – a grotesque first-person-shooter-like record of man’s capacity for inhumanity.

Videos of attacks are designed to amplify the terror, of course. But what makes this atrocity “an extraordinary and unprecedented act of violence”, as prime minister Jacinda Ardern described it, is both the methodical nature in which the massacre was conducted and how it was apparently engineered for maximum virality.

Although platforms such as Facebook, Twitter, and YouTube scrambled to take down the recording and an accompanying manifesto from the gunman, they were no match for the speed of their users; new artificial-intelligence tools created to scrub such platforms of terrorist content could not defeat human cunning and impulse to gawk. In minutes, the video was downloaded and mirrored onto additional platforms where it ricocheted around the globe. Still frames of bodies were screenshotted and uploaded to sites such as Reddit, 4chan and Twitter where it was shared and reshared.

Some Twitter users described frantically trying to stop videos in their feeds from autoplaying, so as not to be bombarded with the recording of the carnage from around the globe. Internet users dredged up the alleged shooter’s digital history, preserving and sharing images of his weapons and body armour. The gunman’s digital footprint – from the rantings of his white nationalist manifesto to his 8chan message board postings before the murders – was unearthed and, for a time, distributed into far-flung corners of the web.

The killer wanted the world’s attention, and by committing an act of mass terror, he was able to get it. It was not the first act of violence to be broadcast in real time. In 2015, two reporters in Roanoke, Virginia, were murdered by a gunman who posted the footage on Twitter. Not long after, Periscope, a live-streaming app, came under fire after a teenager live-streamed her suicide.

Other murders have been broadcast live on Facebook, like the apparently random killing of Robert Godwin in Cleveland, Ohio, in 2017. There have also been numerous recording of encounters – sometimes fatal – with police.

Since the live video tool debuted in late 2015, users have also broadcast rape and child abuse – a 2017 survey by BuzzFeed News found “at least 45 instances of violence” across the platform.

Yet the Christchurch shooting feels different, in part due to its perpetrator’s apparent familiarity with the darkest corners of the internet. The recording contains numerous references to online and meme culture, including name-checking a prominent YouTube personality shortly before beginning the attack.

The digital trail the shooter left behind appears to depict a white supremacist motivation for the attack. There is much, at this early date, that is unknown despite what’s been posted online. The 87-page manifesto, for instance, is filled with layers of ironic, self-referential commentary, apparently written to specifically enrage the communities that appear to have helped radicalise the gunman in the first place.

It seems that the Christchurch shooter understands both the platform dynamics that allow misinformation and divisive content to spread but also the way to sow discord.

As terrifying as the violence itself is, is how well the online community worked in the gunman’s favour. This may be our new reality. Not only has conspiratorial hate spread from the internet to real life; it’s also weaponised to go viral. – New York Times