‘Stormont will end up as a big hotel’: How North Belfast feels about a UK election 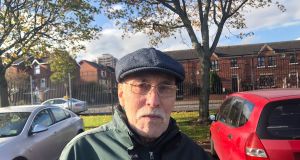 Late October, November and December are not good months to expect election fever in Northern Ireland, and so far in North Belfast people are cold about the pre-Christmas election.

John Keenan, a retired Bombardier worker, said he would vote to turn Parliament Buildings at Stormont into a hotel but initially, at least, he wasn’t thinking about exercising his franchise in this Westminster contest.

“I’m telling ye, that’s what’s going to happen to Stormont; it’ll end up as a big hotel,” he says on his way into the Cityside shopping centre, formerly Yorkgate, in the North Belfast constituency.

Yes, he knows that this election is for Westminster and not Stormont, but says his point still holds, which is that Northern Ireland politicians “just can’t agree” whether in Belfast, Brussels or London. And that is why he is not voting. “The simple reason is they don’t know what they’re doing. It is just a big black hole here.”

North Belfast is one of the most combative constituencies in this election with DUP deputy leader Nigel Dodds under pressure to hold the seat from the challenge of Sinn Féin’s John Finucane, the Belfast lord mayor and son of murdered solicitor Pat Finucane.

“Oh, I did not know that,” says Mr Keenan, surprised and unaware that John Finucane was the Sinn Féin candidate. He says Pat Finucane was his neighbour in North Belfast.

“Oh, I think John will get in, God bless his father, he seems to have the right temperament.”

So will he now vote? “Oh yes, obviously I am a nationalist at heart. I did not know John was standing, oh God bless us I will be voting for him.”

‘Politics is in a mess’

Hardly warm words as far as the DUP is concerned. Still party officers would have been content with the views of Ben, a man in his 30s who says he will definitively vote, and for the DUP. From the Lagan Valley constituency his vote will go to the outgoing MP, Jeffrey Donaldson. “I like Jeffrey.”

“Politics is in a mess at the moment,” he says. He has had enough too of Brexit, and would welcome a return of Stormont.

“For me what was going on this past week – abortion and homosexual marriage being passed; I feel very strongly about both these things. I feel if Stormont had been sitting we could have prevented that.”

For some reason the women asked are reluctant to offer their election views. Joanne says the last thing she wants are politicians knocking on her door in the lead up to Christmas.

“I am not into politics; maybe I should be, but I’m not,” she says.

John (47) is from West Belfast where Sinn Féin’s Paul Maskey – if he runs again – won’t have any difficulty being elected in Gerry Adams’s old constituency.

“There is a mental health tsunami coming our way because there are so many people living under stress because of the new universal credit welfare system,” he says. “I knew 19 young guys who took their own lives within a 26-month period. Suicide is through the roof.”

Similar to Mr Keenan, whatever about the House of Commons, he laments the absence of powersharing here. “We have no government so we are a ship that is heading for the iceberg. We definitively need strong leadership, but we haven’t got it. Leaders have failed the people here, on every side of the fence.”

On Brexit he is “sick of listening to it”. He would prefer to have the focus on getting the Northern Executive and Assembly back. “That would make a massive difference, it would give us some direction,” says John.