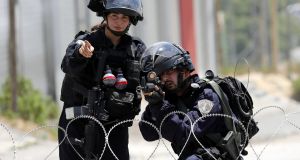 Israeli police take up position in the village of Halhoul in the West Bank following clashes with Palestinians protesting against the US economic conference. Photograph: Abed Al Hashlamoun/EPA

The Trump administration’s Middle East workshop opening on Tuesday in Bahrain will be attended by representatives from Egypt, Jordan, Morocco, the United Arab Emirates, Qatar and Saudi Arabia, but not Palestine or Israel.

During this event, the slick and glossy 40-page US economic proposal, Peace Through Prosperity, released last weekend, is to be formally presented to participants.

“Generations of Palestinians have lived under adversity and loss, but the next chapter can be defined by freedom and dignity,” the White House stated.

The Palestinian Authority and leading Palestinian businessmen are boycotting the event. Israeli officials have not been invited, although Israeli business people are taking part.

The plan, authored by US president Donald Trump’s son-in-law, Jared Kushner, envisages the provision over 10 years of $50 billion (€44 billion) in grants, loans and private investment.

No financial commitments have been made by Gulf Arabs, Europe, and international institutional and foreign private investors who are expected by the US to be primary financiers.

Palestinian commentators argue in the plan there is no mention of “Palestine” or the “two-state solution” involving the creation of a Palestinian state alongside Israel, the peace deal accepted by the international community.

The political portion of the US administration’s “deal of the century” is to be issued after Israel forms a new government. This two-stage strategy has prompted Palestinian politicians to contend they are “not for sale” at a time their economy is in free fall and the peace process is deadlocked.

Israeli prime minister Binyamin Netanyahu said he would consider the plan, while Palestinian president Mahmoud Abbas has rejected the US approach. “The economic situation should not be discussed before the political one,” he argued. “As long as there is no political solution, we will not deal with any economic solution.”

He accused the US of trying to put an end to the Palestinian cause by turning “a political issue into an economic one”.

Mr Abbas cut connections with the Trump administration in December 2017 after the US president recognised Jerusalem as Israel’s capital, in spite of the fact that Palestinians claim the eastern sector as the capital of a future Palestinian state.

Subsequently, Mr Trump ended $500 million in funding to the Palestinians and closed the Palestinian mission in Washington. Last week his ambassador to Israel, David Friedman, argued that Israel had the right to annex some of the West Bank, territory Palestinians demand for their state.

An official with the Palestinian Hamas movement which rules Gaza, Ismail Radwan said the Palestinian cause was a nationalist one, the “issue of a people who are seeking to be free from [Israel] occupation”.

Veteran Palestinian politician Hanan Ashrawi tweeted, “First lift the siege of Gaza, stop the Israeli theft of our land, resources and funds, give us our freedom of movement and control over our borders, airspace, territorial waters etc. Then watch us build a vibrant prosperous economy as a free and sovereign people.”

On the eve of the workshop, the Arab League decided to grant $100 million monthly to the Palestinian Authority to ensure its continued existence and independence.