Muslims in Egypt divided over calls to end polygamy 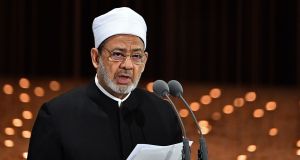 Sunni Muslims’ highest religious authority has precipitated a row in Egypt by ruling that polygamy is unlawful for Muslims.

“In 90 per cent of cases – and I am not exaggerating – polygamy involves injustice toward the wife, her family and her children,” said Sheikh al-Azhar Ahmed al-Tayeb, the grand imam of Egypt’s Al-Azhar mosque, during a weekly sermon broadcast on al-Azhar’s television channel.

“Polygamy is an example of a distorted understanding of the Koran and the Sunnah [traditions] of the Prophet . . . polygamy is a right that is restricted by conditions, such as the condition of fairness. If there is no fairness, polygamy becomes haram [prohibited]. This issue is not open for experiments.”

Sheikh al-Azhar quoted a verse from the Koran which permits marriage to no more than four wives but imposes the condition “if you fear that you cannot do justice, then [marry] one” (Chapter 4, Women, verse 3).

Al-Azhar, however, refused to call for the legal banning of polygamy, rejecting the example of Tunisia. He also called for a revamp of Muslim attitudes towards women, reflecting changes in women’s status due to education, employment and family planning.

While Egypt’s National Council for Women lauded al-Azhar, a high-profile revivalist Muslim leader contended that polygamy should be promoted as it is in the interests of both sexes.

Preacher Sameh Abdel Hamid Hamouda used social media to send the message: “Polygamy is a societal solution to the crisis of spinsterhood in Egypt.” He said polygamy should be encouraged “among men who can afford it. This would give many unmarried girls the chance to have a family and children.”

Hamouda is a former member of the al-Nour party, which belongs to the Salafi movement with roots in the 18th-century Saudi Wahhabi sect.

Al-Azhar’s ruling on polygamy is linked to the family planning campaign “Two is Enough”, launched by president Abdel Fattah al-Sisi last year. The focus is on rural Egypt, where polygamy is practised and families are large.

Egypt’s population has reached 104 million and is growing by 2.6 million a year, although the country does not have the resources to sustain so many people. Egypt must “change its way of thinking”, Randa Fares of the Ministry of Social Solidarity told Reuters. Egyptians feel they must have one son or more to preserve the family name and identity and care for parents in old age.

“Two is Enough” is not the first attempt at family planning in Egypt. When in the 1960s Egypt’s population was 30 million, the government, backed by al-Azhar, launched a birth control campaign. This ended during the 1970s when then-president Anwar Sadat courted the Muslim Brotherhood, which opposed birth control.

Although birth control is not banned in Islam, and medieval Muslim scholars wrote manuals on birth control methods, modern conservative Muslim clerics have made common cause with the Vatican on this issue.

In Egypt a US-funded family planning effort cut the fertility rate from 5.6 children in 1976 to 3.0 in 2008, but when funding was withdrawn, the programme stalled. “Two is Enough” is mainly Egyptian-financed, with US and UN injections of funds. The aim is to reduce the fertility rate to 2.4 by 2030.

In past centuries al-Azhar had great influence in the worldwide Muslim community, and could regain clout if governments are prepared to challenge opponents of change, who have been in the ascendant of late.