Warehouse operators warn of storage as businesses stockpile for Brexit 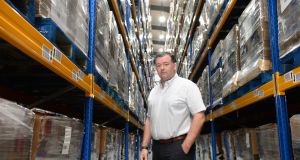 Michael Dixon, of Dixon Transport, in a warehouse full of goods because of Brexit. Photograph: Dara Mac Dónaill

Warehouse operators have warned of potential shortage of storage space in Dublin as businesses stockpile for a possible no-deal Brexit fearing new tariffs and supply restrictions.

Large firms exporting produce to and from Northern Ireland and Britain have leased additional space in warehouses and storage facilities around Dublin as precautionary measures should there be delays in transporting goods across the Border or the Irish Sea if the UK crash out of the EU without a deal.

“I don’t think there is any storage massively available right now. Everything is full at the moment,” said Michael Dixon, managing director of Dixon Transport, which has a warehouse near Dublin Airport.

The company’s facility is full, he said, and between 40 and 50 per cent of his firm’s storage space has been taken up with stockpiling supplies to ensure supply chains are not interrupted by Brexit.

Mr Dixon said the produce being stored is primarily pharmaceuticals and food, including a considerable amount of dairy products.

One Northern Irish supplier is storing 6,000 pallets of soft drinks in the Dublin warehouse in case there are delays on the 100 truckloads of produce that cross the Irish Border every day after Brexit.

“The demand for storage space is enormous at the moment, but we think it will be short-lived because our company’s opinion is that there will be some form of Brexit deal.”

“We have inquiries for probably another 100,000 square feet at the moment. Some of these people are under some pressure.”

One British firm which sells 15,000 tonnes of food in the Irish market every year asked if the firm could store 10,000 tonnes to cover eight months’ worth of supply to cope with a potential hard Brexit.

The company wanted short-term storage in Dublin while it rearranged the Irish supply to come from a manufacturing facility in Spain should the UK crash out of the EU without a deal.

“We just don’t have sufficient space to facilitate something short-term like that,” said Mr Cooke.

He said companies might be able to find storage space to prepare for Brexit but it may be unsuitable, in the wrong location or difficult to manage.

His company, like many others, could not afford to prepare for a hard Brexit because of the cost involved; it would require hiring 25 additional customs clearance agents to cope with 1,500 consignments that the company moves across the Border with Northern Ireland and the Irish Sea to Britain.

“We couldn’t provide the resources for a hard Brexit unless we knew there was actually going to be a hard Brexit,” he said.

Mr Cooke dreaded the prospect of a disorderly UK exit.“A sudden crash-out of the UK would be a disaster for a significant number of our clients.”

Another company which provides temporary storage says it has been inundated with requests from companies looking for semi-permanent warehouses to store emergency supplies to prepare for Brexit.

“We are getting a lot of companies both north and south of the Border looking for short-term, fully insulated storage,” said Johnny Cooper, who owns a company called Big Space Solutions in Co Meath, alongside his transport business Cooper Transport, Warehousing and Logistics.

He said the company received inquiries for 25 or 30 Brexit-related structures in addition to 10 temporary warehouses the company had built for companies preparing for the UK’s exit.

“Originally, they were for six-month projects but they have been extended, one of them for five years.”