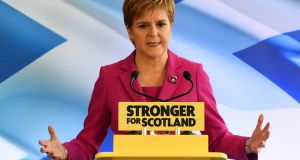 Nicola Sturgeon has opened the door to an alliance with Labour after the general election if Jeremy Corbyn agrees to a second referendum on Scottish independence next year. Ms Sturgeon said the Scottish National Party (SNP) would drive a hard bargain with Labour, and she does not foresee a formal coalition between the two parties at Westminster.

“I don’t think anybody who steps back from this would be surprised to hear me say that the SNP is not going to be giving support for parties that do not recognise the central principle of the right of the people of Scotland to choose their own future,” she said.

Any party, if it is Labour after the election, that finds itself in a minority situation needs the support of other parties

Ms Sturgeon was speaking after she launched the SNP’s campaign in Edinburgh, as a new opinion poll suggested that the party could increase its number of MPs from 35 to 50. Mr Corbyn has said he will not do any deals with smaller parties and, although he is open to a second independence referendum, he insists it would not be held in the early years of a Labour government.

The SNP leader, who has ruled out supporting Boris Johnson in government under any circumstances, said a hung parliament would force Labour to reconsider its opposition to working with other parties.

“Any party, if it is Labour after the election, that finds itself in a minority situation needs the support of other parties. I can see that from experience. I am the leader of a minority government just across the way from here right now. That position gives Scotland significant political influence. The first step we have to take to make sure we can get there is to vote in a way in Scotland that helps deprive Boris Johnson of the majority he wants and put SNP in the driving seat of the progress we want to see,” she said.

The Conservatives, who face the prospect of losing most of their 13 seats in Scotland, have ruled out another referendum on Scottish independence. And Jo Swinson said on Friday that the Liberal Democrats would also oppose a second vote, which she said would be a recipe for chaos.

If the education system had been better under Margaret Thatcher, I might have known

“The SNP should be learning the lessons of Brexit, not repeating the mistakes. This is about stopping chaos. If you have an independence referendum, that’s about adding more chaos, more uncertainty, more cost and difficulties for families across Scotland, and it’s the last thing we need,” she said.

“We are in a situation here in Scotland where we’ve had this constitutional obsession for eight years now. People actually just want government to get on with making their lives better.”

A Labour candidate has withdrawn from the election following allegations that he used the term “Shylock” at a meeting while a Jewish councillor was present. Graham Bull, who was to be the party’s candidate in the safe Conservative seat of Clacton, said that he had not known that the character of the moneylender in Shakespeare’s The Merchant of Venice was Jewish.

“I grew up in a working-class area in Ilford where this was a common saying, but I didn’t know it was offensive. This was a genuine accident and I reiterate my sincere apology for this mistake,” he said.

“If the education system had been better under Margaret Thatcher, I might have known.”

Boris Johnson said on Friday that he had abandoned plans for an inquiry into Islamophobia in the Conservative Party and would instead institute a “general investigation into prejudice of all kinds”. Labour described the decision as “a spectacular betrayal of Muslim people across our country” and another broken promise from the prime minister.