World View: Welsh are finding it harder to make the case for the Union

Some 40 per cent of Welsh voters are now ‘indy-curious’, according to a YouGov poll 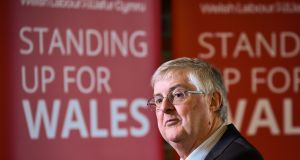 Mark Drakeford, first minister of Wales, at the launch of the Welsh Labour Party election campaign: there is growing interest among Welsh Labour voters in an independent Wales. Photograph: Ben Birchall/PA Wire

“The continuity of the UK is, today, more at risk than at any moment in my lifetime.”

The Welsh first minister Mark Drakeford’s warning in his recent Kier Hardie lecture is part of a pattern of such statements from Welsh Labour leaders faced with Brexit and now a general election. His predecessor, Carwyn Jones ,told the Eisteddfod cultural festival this summer there is “no future for England and Wales if Scotland and Northern Ireland leave the Union”. If that happens “we may end up independent by default”, he added.

From an Irish point of view it is instructive to observe UK politics through a Welsh lens. The Labour administration in Cardiff is well described as the “only devolved government wholly committed to the Union” by the constitutional lawyer Rick Rawlings, one of the foremost experts on the subject.

The Scottish National Party which governs in Edinburgh is committed to independence and hopes to achieve a second referendum in return for supporting a Labour-led government in London. The Northern Ireland Executive has not functioned for almost three years, and its two governing parties are notoriously split on precisely this question.

Nevertheless, repeated Welsh warnings about the state of the Union and their plans for how to repair and reform it tend to fall on deaf ears in London, whether they be Conservative or Labour. Welsh Labour’s centre of gravity is much more in Cardiff than London these days, as devolution beds down in a more entrenched way. Rawlings was a member of a recent landmark commission on Justice in Wales which recommends it be centred there far more than previously.

Welsh governments led by Carwyn Jones and Drakeford advocate a quasi-federal reformed and reimagined Union which would reserve only specified powers at the centre and devolve the rest, including to a reconfigured England. They demand far more effective intergovernmental sharing through the underdeveloped joint ministerial councils supposedly coordinating relations between the devolved and central administrations, including on Brexit issues. Both men are scathing about the casual disregard of Welsh interests and due process involved from London.

This matters because a failure to address such issues undermines the case they make for a renegotiated Union in their political competition with nationalists saying it can never be achieved. The increasing commitment to a more centralised and assertive unionism in the Conservative party and Labour governments’ prioritising of Westminster/Whitehall power over constitutional change make it more difficult for this Welsh case to secure a hearing.

To increase leverage they are working more closely with the Scottish government led by the SNP – on devolution, Brexit and now on the voluntary nature of the UK’s Union. Drakeford explicitly supports a second referendum on Scottish independence on the basis that the Union must be seen as “a voluntary association of nations taking the form of a multinational state”. He parts company from the SNP on independence because he believes the Union can deliver a better deal.

He and Carwyn Jones also acknowledge growing interest among Welsh Labour voters in an independent Wales. Some 40 per cent of them are now “indy-curious” according to a YouGov poll this week, a trend partly driven by Brexit. The poll shows a hugely increased 28 per cent of Welsh voters now support independence, compared to 72 per cent opposed. This reflects the greater interest shown by several demonstrations in favour of independence this summer.

Plaid Cmyru came second to the Brexit party in the European Parliament elections last May, while Labour came third, underlining how volatile are Welsh politics going in to the general election. The Conservatives hope to compensate for Scottish seats lost by Welsh gains.

Welsh government relations are warmer with and more focussed on Dublin than Belfast. There has been a big welcome for the reopening of the Irish consulate in Cardiff this summer. In contrast official relations with Belfast are under-developed, notwithstanding shared interests in a better functioning Union and growing speculation about possible confederal links between Celtic nations in a hard Brexit outcome.

That should give Northern Ireland unionists great pause for thought and cause for alarm. If they are not able to create cross-Union liaisons with and like the Welsh they face political isolation the more they link up with the Conservatives. The continuity of the Union they cherish is put more at risk by such a failure. The potential consequences for Ireland as a whole are becoming more and more apparent in Britain’s turbulent territorial politics.