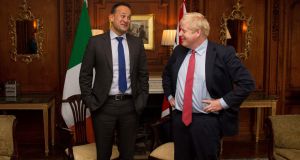 The British general election campaign is finally under way, and the political world here will watch agog as the spectacle unfolds in the coming weeks. It promises to be the most momentous election in decades. The epochal changes wrought by the elections of 1979 (which brought Margaret Thatcher to power) and 1997 (which replaced her successor with Tony Blair) were inevitable before those campaigns began. But this election could go either way. Vastly different outcomes are simultaneously possible. Buckle up, folks, and watch history unfolding.

The election will not just be compelling and consequential. It will be, for Irish politics, instructive.

It is already showing us that the baleful effects of Brexit in Northern Ireland are well progressed. Northern politics has stepped back towards tribalism rather than forward and away from it. Sinn Féin and the SDLP are standing aside for each other in North and South Belfast. Brexit, they say. Sectarian headcount, say others. The DUP and the Ulster Unionist Party are at the same racket.

There are uglier overtones on the unionist side. UUP leader Steve Aiken – whose party is pro-Remain – originally said he would stand against the pro-Brexit DUP in every constituency. There was uproar in some unionist circles, and threats from loyalist paramilitaries.

The UUP withdrew to give Nigel Dodds a free run in North Belfast.

The SDLP’s move to co-operate with Sinn Féin would have been unthinkable in the past. But that party is a shadow of its former self. What does Fianna Fáil, supposedly its new political partners (remember that?) think about this. None of our business, they tell me.

This is the extent of that much-trumpeted alliance: Micheál Martin will go north to be photographed with Colum Eastwood a few times. Individual TDs are helping out. But Fianna Fáil is not providing the sort of logistical, operational and strategic support that the SDLP might have hoped for. It’s not interested enough.

Irish observers bemoan the lack of attention to the North in British politics, and that will be evident again during this campaign. It will barely get a mention in the national election debate over the coming weeks.

For unionists this may be a brutal truth to confront; but just because it is unwelcome doesn’t mean it’s untrue. After all Boris Johnson’s government could not have made it plainer that the North is a lesser priority than Brexit. There is no other reasonable interpretation of its actions.

But northern nationalists shouldn’t be too smug about it; Dublin has other priorities too. When a no-deal Brexit was looming Dublin also demonstrated that maintaining an open border with the North mattered less to it than full membership of the EU single market.

Remember that the Irish Government was willing to introduce border checks (not on the Border, but near it) to protect the Republic’s place in the single market. This was greatly agonised over in Government (though not much advertised nor widely noticed outside) before being definitively resolved. It’s not just London that has higher priorities than the North. So does Dublin.

Labour and the Tories have not been as different since 1983. Fianna Fáil and Fine Gael, by contrast, have never been so close

The North’s increased polarisation reflects British politics more than Irish. In fact the epic clash of absolutes between Labour and the Conservatives, Remainers and Brexiteers, highlights, for those that want to see it, just how similar are the parties who could possibly lead the next government here.

Labour and the Tories have not been as different since 1983. Fianna Fáil and Fine Gael, by contrast, have never been so close.

There are good things and bad things about this. The similarity between the two parties has also given Ireland political stability and the policy continuity which has promoted investment and growth. But it has made Irish politics stultifyingly, stubbornly resistant to change, strangling policy innovation.

Look at it another way: if Jeremy Corbyn wins the UK will be a completely different country to what it would be if Boris Johnson wins. If Martin wins the next general election do you think his Ireland will be much different to Leo Varadkar’s? Me neither.

It’s not that there are no differences between Fine Gael and Fianna Fáil. There are. It’s just that they are not, in the main, policy differences. In the main both parties can be comfortable in any likely kind of government.

This presents the opportunity to the smaller parties to set the ideological and policy character of the next government. The big two are comfortable just being in power, but aren’t big enough to make it on their own. That makes the smaller parties more powerful than ever.

Labour leader Brendan Howlin (whose party meets in conference this Saturday) this week called for co-operation between the “progressive” parties in the byelections this month. It will be interesting to see if this idea gets any traction. If it does it might matter in the next general election. Labour people have been pointing to the red-green coalition in New Zealand that has passed a zero-carbon Bill this week.

The final observation about the British election is an obvious one: nothing can happen here until Brexit is resolved. At the very least that means five or six months of a pre-election period.

Ministers and officials all remarked this week how the political agenda has emptied out. This suits the Opposition more than it does the Government. Any administration needs to move forward, to seek to implement its agenda, to use its power for something.

At the moment that is hard to discern. If that drift continues, the political pendulum – recently pulled towards the Government by the gravity of Varadkar’s Brexit diplomacy – will swing back towards the Opposition.