In a rambling speech to Northern Ireland Conservatives UK prime minister Boris Johnson made the case that Northern Ireland has a "great deal" due to provisions that are excluded from the mainland UK. 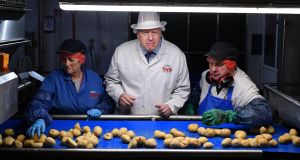 British prime minister Boris Johnson has puzzled business people in Northern Ireland by saying there would be no Irish Sea border for goods from the North exported to Britain.

In a speech to members of the Northern Ireland Conservatives at an election rally in Templepatrick, Co Antrim, on Thursday evening, Mr Johnson also said “there will not be tariffs or checks on goods coming from Great Britain to Northern Ireland that are not going on to Ireland”.

Questioned by Irwin Armstrong, owner of Ciga Healthcare in Ballymena, Mr Johnson said if anyone asked him to fill out a customs form, “tell them to ring up the prime minister and I will direct them to throw that form in the bin”.

There would be, Mr Johnson insisted, “no forms, no checks, no barriers of any kind. You will have unfettered access.”

Under the Brexit deal agreed between the EU and the UK, Northern Ireland will remain in the UK customs union post-Brexit, but will be subject to EU customs rules. This avoids a hard border on the island of Ireland by placing regulatory and customs checks at ports on the Irish Sea.

Stephen Kelly from Manufacturing NI told The Irish Times his organisation’s responsibility was to “hold the prime minister to his word” and ensure he delivered on his commitment through legislation.

“We’re not clear at this point and we’ve asked for the clarity, and it depends who you talk to in government, but there are conflicting reports from them on what this actually means,” Mr Kelly said.

“Boris Johnson is the prime minister, he’s the leader of the country...if that’s what he’s saying he’ll do, we want to make sure he delivers on that.”

Aodhán Connolly, director of the Northern Ireland Retail Consortium, said Mr Johnson’s statement “isn’t the understanding as we have it”.

“We very much look forward to getting the detail from him on how he proposes not to have any paperwork or checks [from] Northern Ireland to Great Britain.

“If this is an aspiration that the prime minister has then we are more than happy and willing to work with him on this. But we are going to need that detail so that we can provide our supply chain with reassurance, and we can continue to give Northern Ireland shoppers the affordability and choice that they have now.”