April 15th, 1989: 96 people are killed and 170 injured as a crush takes place during the FA Cup semi-final match between Liverpool and Nottingham Forest. Video: Reuters 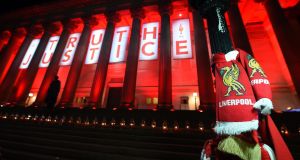 Liverpool scarves hang on a lamp post as St George’s Hall is lit up in red with a giant banner reading ‘Truth’ and ‘Justice’ in April 2016. Photograph: EPA 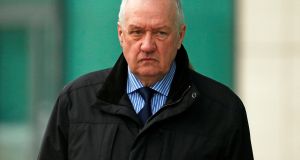 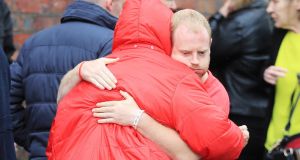 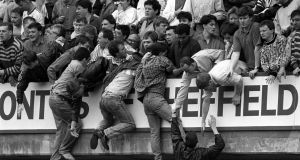 Chief Supt David Duckenfield, the police officer in charge during the 1989 Hillsborough disaster, faces 95 charges of manslaughter, and five other senior figures will be prosecuted in connection with the tragedy. Some 96 Liverpool football fans were crushed to death at the stadium during an FA Cup semi-final and an inquest last year found they had died unlawfully because of gross negligence.

Sue Hemming, the Crown Prosecution Service head of special crime and counter-terrorism, said the prosecutions followed a careful examination of the evidence.

“We will allege that David Duckenfield’s failures to discharge his personal responsibility were extraordinarily bad and contributed substantially to the deaths of each of those 96 people who so tragically and unnecessarily lost their lives,” she said.

Ms Hemming said Sir Norman allegedly told lies about his involvement in the disaster. “Given his role as a senior police officer, we will ask the jury to find that this was misconduct of such a degree as to amount to an abuse of the public’s trust in the office holder,” she said.

Mr Duckenfield (72) faces manslaughter by gross negligence of 95 men, women and children. Sir Norman (61) faces four charges of misconduct in a public office relating to alleged lies he told after the disaster suggesting fans were to blame.

Graham Mackrell, former Sheffield Wednesday club secretary, will be charged with breaching health and safety legislation. Peter Metcalf, a solicitor who acted for the police, is charged with perverting the course of justice, in connection with false witness statements by officers. Former chief superintendent Donald Denton and former detective chief inspector Alan Foster are accused of perverting the course of justice.

Trevor Hicks, president of the Hillsborough Family Support Group, whose teenage daughters Sarah and Vicki were killed in the disaster, welcomed news of the prosecutions. “If I’m honest, I didn’t think we would get to this day, no,” he said.

“We didn’t think we would. This is a success for society at large. There are no winners but it sends a message out that nobody is above the law. After Grenfell Tower and others, the message is ‘watch out, families will come after you’.”

An inquest last year found that the 96 football fans crushed to death at Hillsborough were killed unlawfully and jurors found that Mr Duckenfield was guilty of “gross negligence” which led to the unlawful killings. They blamed Sheffield Wednesday, whose home ground is Hillsborough, for providing too few turnstiles for the capacity crowd at the FA Cup semi-final between Liverpool and Nottingham Forest.

Errors by police and ambulance services contributed to the deaths, almost all of which were caused by compression and asphyxia. The behaviour of Liverpool fans, who were vilified after the disaster, contributed in no way to the deaths.

The decision to prosecute six people in connection with the disaster follows a 28-year campaign by the victims’ relatives. An inquest in 1991, two years after the disaster, returned a verdict of accidental death, which the families succeeded in having overturned more than 20 years later, following the publication of an independent report on what happened at Hillsborough.

Margaret Aspinall, whose 18-year-old son James was killed in the disaster, said victims of other such incidents should take heart from the prosecutions. “The message this sends is ‘Never give up. Carry on fighting.’ This should never happen again. No one should go through this to get to the truth. That’s the legacy of this,” she said.

In the House of Commons on Wednesday, Theresa May praised the Hillsborough families, saying it was a day of mixed emotions for them.

“There have been many years of waiting for the Hillsborough families and the different groups who came together, not just the Hillsborough Justice Campaign. The work done by Margaret Aspinall and others has been absolutely exemplary. As I said, today will be a day of really mixed emotions for them, but we all welcome the fact that charging decisions have been taken. That is an important step forward,” she said.