Kohl family tragedy given closure as German reformer is remembered 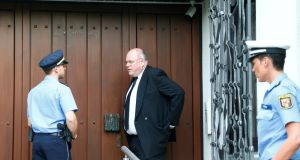 Walter Kohl, son of former German chancellor Helmut Kohl arrives at his fathers home in Oggersheim, Germany: Only after negotiating with police officers and the former chancellor’s widow, Maike, was he allowed inside. Photograph: Ralph Orlowski/Reuters 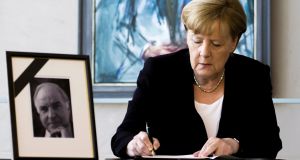 German chancellor Angela Merkel: She and thousands of ordinary Germans expressed their condolences to the Kohl family, and respect for the man whose political decisions changed their lives forever. Photograph: Carsten Koall/EPA

As the European Union prepares an official farewell to unity chancellor Helmut Kohl, who died last Friday aged 87, the final act played out in a long-running family tragedy.

When Walter Kohl arrived at his late father’s home in the southwestern city of Ludwigshafen, he said it had been six years since he last spoke to his father – and that he had learned of his death on the radio.

Only after minutes of negotiation at Dr Kohl’s Ludwigshafen home – with the police guard and the ex-chancellor’s widow, Maike, inside – was he allowed to see his father’s body in the livingroom.

“You see an extremely sad person before you,” he told journalists afterwards. “My father cut off contact to the entire family: to me, to his grandchildren, for whom it was very painful. I’m just so sad it all happened this way.”

After years of strained relations the final break came when Walter Kohl wrote a book in 2011 claiming the Christian Democratic Union (CDU), which Helmut Kohl headed for 25 years, was his father’s real family.

The chancellor staged a happy home life only for political gain, said his son, and ignored his children and his wife Hannelore, even after she was diagnosed with a rare daylight allergy in later years. When she took her life in 2001, after 41 years of marriage, it was Dr Kohl’s secretary who informed the Kohl sons, Walter and Peter, two years younger.

After their father suffered a fall in 2008 that impaired his health and speech, his sons learned by telegram that he had married Maike Kohl-Richter, a former chancellery employee 34 years his junior.

They accuse their stepmother of shutting them out in his last years of poor health – a claim she denies. In his few remaining public appearances, Dr Kohl said of his second wife, who nursed him through his ill health: “Without her I wouldn’t be here.”

European Commission president Jean-Claude Juncker announced plans for a formal EU farewell in Strasbourg – the first such event in EU history – to honour Dr Kohl’s contribution to unity in Germany and Europe.

“He left his mark on the history of this continent by bringing people from east and west together in unity,” said Mr Juncker to the Bild am Sonntag newspaper.

On Sunday Chancellor Angela Merkel, the ex-chancellor’s one-time protege, opened a book of condolence in the Berlin chancellery commissioned by her predecessor before the federal government’s move back from Bonn in 1999.

Thousands of ordinary Germans expressed their condolences to the Kohl family, and respect for the man whose political decisions in 1989/1990 changed their lives forever.

Thorsten Zschorlich, a Hanover police officer, wrote in the condolence book that he spent the evening of November 9th, 1989, in a “blue cloud” of exhaust fumes from East German Trabants, streaming over the border into West Germany. “I had no idea it would be the most wonderful and exciting day of my life,” he wrote. “For that, and all the rest, I thank you very much.”

Melanie Stütz was a 10-year-old East German girl who camped with her family in the West German embassy in Prague in 1989 until the Kohl government reached agreement to bring them allowed them travel west. “Kohl evened out the path to a life in freedom,” she said, “in a united Germany and Europe in which, in future, one can hopefully also travel without borders.”

Carola Krug, born in 1982, the year Dr Kohl became chancellor, wrote: “In times like these, he is sorely missed.”