Entrances to Houses of Parliament guarded by armed officers

British MP, David Lidington confirms that an attacker with a knife has been shot at Westminster as eyewitness footage captures the aftermath from the scene. Video: Reuters/Parliament TV 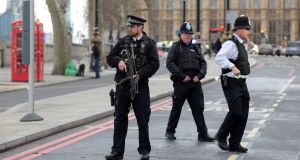 Armed officers attend to the scene outside Westminster Bridge and the Houses of Parliament. Photograph: Jack Taylor/Getty Images

The Palace of Westminster in London and the parliamentary estate has significant security measures in place.

There are a number of entrances onto the parliamentary estate for staff and visitors but all are subject to security measures.

Visitors can enter through the Cromwell Green entrance and through the main doors at Portcullis House. Both entrances have airport-style security.

There are a number of entrances for holders of parliamentary security passes, MPs, palace staff etc, which are required to gain access to any one of the entrances. Armed police are stationed at all of the main entrances.

Armed police officers are always stationed on the Carriage Gates which is the main road entrance into Parliament. The entrance is always blocked by metal barricades and there are also car park-style barriers for vehicles on the way in and out of the palace.

Armed police are stationed throughout the palace itself.

Sniffer dogs are often seen on the parliamentary estate carrying out checks, including before major events such as Prime Minister’s Questions.

Security incidents have occurred on the parliamentary estate over the years, most notably when Prime Minister’s Questions was halted in May 2004.

This occurred after Fathers 4 Justice campaigners threw condoms filled with purple flour and glitter at Tony Blair, although it initially sparked fears that the Commons was under biological attack.

A glass screen was installed in the public gallery to prevent similar incidents.

An increased focus on the security of MPs emerged following the murder of Labour MP Jo Cox in her Batley and Spen constituency in June 2016.

A police hotline was set up for MPs to report threats made against them.

Figures released this week showed a specialist police team set up to investigate crimes against MPs, the Met’s parliamentary liaison and investigation team, has investigated more than 50 complaints in the six months of Mrs Cox’s murder.